DAN BAKER – PISTOL IN MY POCKET 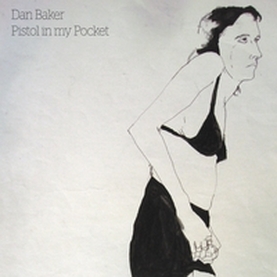 On first play this album, on some songs, reminded me of a sparse Tom Waits, on others Steely Dan and even Blue Nile came to mind. I can’t put my finger on why, there is certainly very little of the latter pair that is discernible, unless it is the complete individuality that all three bring/brought to their music. Allied to this, there is something of the moody late night Blue Nile sparseness, although the feel of these songs and the music is much darker with a slightly unsettling atmosphere to the whole recording.

There is a haunting spacy echo on the vocals and some of the instrumentation as if the recording was done in a large empty room, which it was! The album was recorded at the 1867 Recording Studio, Chelsea, MA, a former Masonic temple that has 60ft vaulted ceilings, which accounts for the unusual echoing sound. This gives the recording a wide open spaciness that suits these sometimes claustrophobic tales, with the sparseness of the instrumentation emphasising the deep tensions within.

The album has a natural, appealingly undisciplined feel, as if he has just come up with some great songs and was afraid of forgetting them, so used instrumentation that was at hand, and it works brilliantly! The songs were all written by Dan Baker and many relate to the search for the way ahead in a confused life, although there are areas of dramatic certainty. Accompanying Baker, who takes lead vocals and plays guitar are Rob Flax on violin and vocals, Chris Enwright, keyboards, Karl Grohmann, drums and percussion and Alan Uhler on upright bass.

The album opens with Pistol In My Pocket, a song that starts with a nice mellow acoustic guitar intro before Bakers tormented vocal joins in on this sparse, dark song with a threatening atmosphere of intense desperation. It is followed by more torment on Threw Me Down The Well a dark unsettling tale about a spurned lover, with a beautifully chiming melodic guitar and intense vocals that conjure up a deep dark eeriness that has a nightmarish quality. What I’m Looking For has an excellent guitar and drum sound and an all round ‘chunkiness’ with his catchy repetitious lyrics given diversity by the strong emotive vocal and the chunky drum sound and melodic guitar and keyboards on the tale of someone searching for the way ahead. Up On The Roof is a piano led, slow tender ballad that in just a few words paints a picture of normality but with a sense of drama, whilst Down In The Canyon is an echoing and sinister tale of the dark side of life. It is a threatening and haunting song that builds in intensity as the threat reaches fulfillment and ends with a sinister cacophony of dramatic sound.

This is an excellent and unusual album in just about every way. The spaciness of the sound alone gives the recording a different atmosphere but the songs of torment and his often tormented vocals give a sinister air to even the tales  that don’t have quite such a dramatic edge. This is his third album, on the strength of which I will be putting some time to what will almost certainly be excellent use, by investigating it’s two predecessors. So will you after hearing this terrific recording!