A History of the Blues: Chapter 2

Note – 1920 – ‘Race’ recording begins. Women such as Ma Rainey, Ida Cox, Bessie Smith were the first Blues/Race artists to record. When ‘Crazy Blues’ took off, other companies started to get on the ‘Race music’ bandwagon with other women singers, who were all steeped in Vaudevile, tent shows etc.
Westinghouse initiates commercial radio broadcasts & the dawn of  commercial radio makes music available to people nationwide.

1/ Crazy blues – Mamie Smith. 1920. Cincinatti Blues.
B.1883, Ohio. D.1946, N.Y.C. Song sold 1,000,000 copies (for OKEH)in the first 6 months of release & made companies aware of the potential in ‘race music’. She was filling in on a session for Sophie Tucker at the time. Started out as a dancer in her early teens & sang in vaudeville in Harlem before w.w.1. Played vaudeville & jazz. Made several films in later life.


Note1921 - Record sales in the U.S. topped the 100 million mark. The main recording studios were, Paramount in Chicago, whilst all of the others were in N.Y.C.

Note 1922 - Start of the Paramount race label. Mayo Williams became the talent scout.The label also used local talent scouts such as H.C. Speir who ‘discovered’ Tommy Johnson, Ishmon Bracey & Charley Patton. The company used sub standard (even for those days) equipment to record some of the all time greats of blues.


2/ Shake that thing – ‘Papa’ Charlie Jackson. 1924. Smithsonian collection of classic blues singers
Probably the first male ‘blues’ recording artist. B; New Orleans, 1885. D. Chicago, 1938. Sang & played Banjo, Ukelele, Guitar. He tuned his 6 string banjo like a guitar. Toured with minstrel & medicine shows up to the end of W.W.1. Played bawdy, novelty, ragtime & Blues. Moved to Chicago after the war & played for change at Maxwell Street market. First recorded in 1924 by the Paramount label.  Recorded about 70 sides up to 1934. Also recorded with Jazz bands, Blind Blake, Ida Cox & Ma Raineys last session in 1928. His most popular song was ‘Shake that thing’ in 1925. Is regarded as highly influential,(particularly on his friend, Bill Broonzy) if not a major artist. The exact manner of his death is a mystery.

4/ Stack ‘o’ Lee blues – Ma Rainey. 1925. Black bottom.
1886 (Georgia).-1939 (Georgia). Was the daughter of 2 minstrel performers. Her first performance was in 1900. Married at 16 & travelled in minstrel & tent shows with her husband. Played pop & minstrel as well as blues, but had a tougher approach than most others. Played with Tampa Red & Blind Blake as well as, ocasionally, Louis Armstrong. Started out in travelling medicine shows & apparently gave the young Bessie Smith lessons in singing. Recorded about 100 sides between 1923-28.


5/ Stackalee – Frank Hutchison. 1928. Times ain’t like they used to be, vol.3
B.1891, W.Va. First recording was "Worried Blues" in 1926. He lived for much of his life in Logan county, West Virginia, a hard mining area for both blacks & whites. He played slide guitar, (possibly the first whiteman to be recorded doing so) using a pocket knife, which he learned how to do from a black railroad worker named Henry Vaughan, in about 1905. He learned 19th century songs from another black, Bill Hunt. By the early 20,s he was good enough to eke out a living from his music, by playing in mining camps, political rallies, cinemas etc. During the depression he played on riverboats on the Ohio river, before giving up music & settling down with his wife. He opened a store which was eventually burned down. he died of liver cancer in 1940.


6/ Stagarlee – Taj Mahal. 1967. De ole folks at home.
.B.1942, N.Y.C. Henry St Clair Fredericks. Covers all types of Folk/Roots music & is multi instrumentalist. Studied agriculture at Uni. Of Massachusetts & moved to L.A. in 1964, where he teamed with Ry Cooder & formed ‘The Rising Sons’, their 1 album being shelved until 1992. Started recording solo in 1967 & continues to this day.

7/ That black snake moan – Blind Lemon Jefferson. 1926. Penitentiary blues
B.1897, Tx. D. Chicago, 1929. The first blues ‘superstar’. Was popular all over the U.S. Moved to Dallas around 1917 where he played street corners. At his peak could earn up to $150 dollars a day on the street corners. Also played spirituals & folk songs. Cut more than 90 sides for paramount between 1926-29. Was found frozen to death on a Chicago street.


9/ Milk cow blues – Freddie Spruell. 1926. Country blues bottleneck guitar classics
Virtually nothing known about him, other than the fact that he was influential on many & probably came from the Mississippi delta region.


10/ Milk cow blues – Kokomo Arnold. 1934. The roots of Robert Johnson
B. 1901, Ga. D. 1968, Chicago. Early 20’s he was primarily a bootlegger that used music as a sideline. Made his first recording in 1930. When prohibition was repealed he turned to music full time & recorded about 80 sides between 1934 & ’38. Had his own distinctive slide guitar style. When rediscovered in early 60’s didn’t want to know about restarting his career!

12/ Milk cow blues – Mississippi Fred McDowell. 1966. Long way from home
B.1904, Tn. D.1972, Tn. Without doubt one of the all time great Delta blues players, but never recorded until 1959. Was totally against ‘selling out to rock ‘n’ roll’, & continued playing in the old style until his death.


14/ Whitewash station – Memphis Jug Band. 1926. Roots of rap
Was led by Will Shade. They were the first artists to be recorded by Ralph Peer in Memphis. Their next session was in Chicago. They played Blues, jazz, ragtime, novelty & folk, sometimes with female singers incl. Memphis Minnie. Recorded about 75 sides over 7 years. 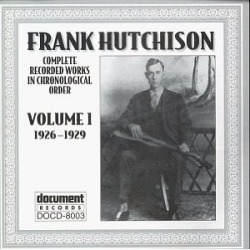 
16/ Worried blues – John Fahey. 1965. Dance of death & other plantation favourites
B. 1939. D.2001. Made several dozen albums, nearly all solo on his slide guitar. Was one of the best during his lifetime & was highly eccentric! Played all types of roots music, from country to blues & Jazz, & even raga’s.