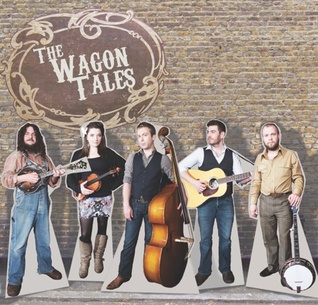 Whilst this is music that many will class as bluegrass, it actually covers a much broader spectrum, including a  strong folk element, even a little old timey and quite a powerful feeling of experimentation. The album is certainly rooted in the catch all‘Americana’ genre, the strongest influence, but also British folk perhaps unsurprising because they are a British band, albeit one whose members are highly
experienced musicians who have worked in this generic mix on other projects for a considerable length of time.
The band consists of Ben Somers on bass,
saxophone and vocals, Joe Auckland, banjo, trumpet and vocals, Lewis Cohen,  guitar and vocals, Kate Robinson on fiddle and vocals with Joe Hymas playing the mandolin. Their individuality and considerable originality is obvious thanks to the fact that all of the songs are band originals, with Ben Somers being responsible for five, three by Joe Auckland, two by Lewis Cohen and one by Joe Hymas plus a band co-write.
This is not music by rote. Whilst it is mainly highly energetic, there is also a huge amount of skill in this blend of folksy roots music that cannot be played with this amount of fire and enthusiasm unless you are really enjoying yourself. This is shown by the drive and inherent drama of most songs on this excellent album and by their sound that gives a strong sense of individuality, and of course as with all of the best music they don’t really sound much like anyone else. The way the fiddle is used and often dominates increases the air of drama in virtually every song, almost bringing, at least in part, a jazzy pseudo classical feel.  In some ways it feels as if their, at times, virtuosic instrumentation skills are so great that they have to step out of traditional song structures, finding them too restrictive, something that leads to an even greater degree of experimentation. Many will find this appealing but I imagine some could just easily find it a little confusing because of the variations on display.
The album kicks off with The Walker, it’s speedy banjo and fiddle introduction giving as a first
impression the start of a bluegrass album, but when the dramatic male vocal comes in the genre has to be rethought and it is obvious the songs structure is not all that close to bluegrass. There is more of a folksy feel but with a  bluegrass instrumentation, a situation that occurs throughout the whole album although not on every song. Slowly
Slowly, has a similar instrumentation but with the addition of trumpet and saxophone, just to keep the listener off guard! It is also an unusual harmonic duet that works well despite the unusual blend of instruments. Butterflies
follows a more traditional song structure than most on this unusual album. It is an excellent slow folksy ballad with a leaning towards traditional country that includes dobro, mandolin and bass dominating with the gradual  introduction of banjo and with a nice male lead vocal and excellent female harmonies. This is followed by the Joe Hyams penned F.I.T.S. a high quality, speedy instrumental on which mandolin, fiddle and banjo exchange leads. Split Personality Blues is an excellent song that is a male harmonic duet rooted in bluegrass but including elements of folk and even a little bluesiness, with excellent driving fiddle, guitar and mandolin. Final mention goes to Another Cup Of Coffee, a traditional feeling song that includes some very good band harmonies on an easy loping song dominated by banjo and fiddle with the harmonies ensuring the anthemic quality of ‘Will the circle be unbroken.’
The Wagon Tales are a band that would probably be happy to be considered an outfit of musicians who fit into no determinate genre, although they may find that in the future it is necessary to have a ‘signature sound’ rather than at the moment being a roots band with a myriad of skills and influences. Having said that, those skills are high and well developed and the album is hugely entertaining to such a degree that I certainly don’t anticipate filing it away anytime soon! It’s one of those albums that tends to reveal new facets with each play. You can’t really hope for or expect more than that!