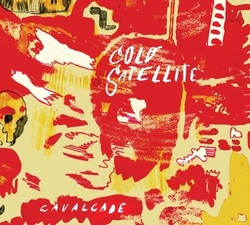 
Any artist considered to be truly playing within the wide ranging ‘roots’ music genre should be compelled to record an album as stylistically diverse as this excellent recording before they can reasonably be said to be ‘complete’ roots artists. Were that the case it
would be a very much less crowded genre with Jeffrey Foucault certainly being a modern day founding member. It seems he can perform everything from country to alt. country and blues with a little roots rock thrown in for good measure, all of an incredibly high quality. This intensely dramatic album of songs that are based around Lisa Olsteins poetry is very cleverly conceived and brilliantly constructed. It uses unpublished poems and fragments of work that Lisa gave Jeffrey, he put music to them and in many ways expanded the ‘vision’ to encompass just about every roots genre imaginable. Not everything works perfectly but by the same token there is nothing that can be considered ill
advised. There are several powerful hard driving roots rockers that seemed to drown out the lyrics at times and didn’t exactly enhance the album but ultimately there is a lot of experimentation going on with this recording and  Foucault should be applauded for his musical and stylistic interpretation of Lisa’s lyrics, most of which work incredibly well.
Their vision can only be enhanced by the quality of the lineup that forms ‘Cold Satellite,’with artists of the caliber of Billy Conway (Morphine) on drums, Jeremy Moses Curtis (Booker T) on bass, David Goodrich (Chris
Smither) on electric guitars, Alex Mccollough on pedal steel, and Hayward Williams on backing vocals,
keyboards, and electric guitars. A stellar cast, but one that is entirely sympathetic to the songs and shows admirable restraint where needed but also has the ability to really rock out on several tracks.
The album gets under way with the intense hard driving roots rock of Elegy (In A Distant Room), with raw  clanging guitars and an excellent solo, propelling Foucault’s impressive vocals, followed by the deep blues of Necessary Monsters, with his vocal and the lead guitar creating an atmosphere that many straight forward blues players might envy. Third song in, album title track Cavalcade, signals another change of direction, this time to a gorgeous slow moody country ballad that has a nice twangy guitar alongside the steel guitar with Foucault’s lead vocals draining every drop of raw emotion out of an excellent song. What follows is more blues, country and rock but none of the songs sit firmly under each of these stylistic banners with many blending two or even all three of these generic roots so that the whole things flows, perhaps surprisingly, very well. Pearlescent has a dark moody sound with dirty guitars on a quite intense song that has an appealing discordancy, followed by a hauntingly dramatic slow moody alt. country ballad in Bomblet. The album closes with Every Boy, Every Blood, a tremendous song that has a restrained performance with strummed acoustic guitar, steel guitar and a little piano with his tuneful, evocative vocals . Gorgeous song!
Overall this is a very good album, particularly as it has such a strong experimental feel. As I wrote earlier not everything works as well as it’s neighbour, but the album does hold together as a concept thanks to the skill on
show in the songwriting, the playing and for me, above all, Jeffrey Foucaults tremendous vocals.