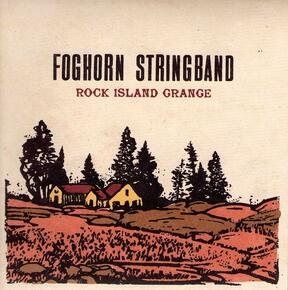 I usually try to give a potted history of bands when reviewing an album but in the case of the Foghorn Stringband that is not an easy job, despite which I'll try to give the reader some idea of who and what they are, so here goes. There have been and still are various names depending on who is available, starting with the Foghorn duo, Foghorn trio, obviously the Foghorn Stringband; they sometimes link up with Dirk Powell as The Dirk Powell band, Caleb Klauder has also made several solo albums as well as a couple of incredible recordings with Reeb Willms, they even started life as 'Foghorn Leghorn (no relation to the London based band of the same name). You can be pretty sure I've missed out various other aggregations and links but that will at least give the reader some idea of what to look for when they try to build a collection of their albums, as anyone who hears this tremendous new recording surely will.
There have been lineup changes over the fifteen or so years of the bands existence but the current and relatively long term lineup is Caleb Klauder on vocals, mandolin and fiddle,  Reeb Willms, vocals and guitar, Nadine Landry, vocals and upright bass and Stephen ‘Sammy’ Lind on vocals, fiddle and banjo.
I've seen them play live on several occasions over the years and they never make for anything less than a riveting evening of songs and instrumentals driven by their genuinely virtuosic playing. This tremendous recording follows the same path with dynamic instrumentals and evocative, atmospheric vocals that switch between male and female vocalists, always keeping the listener wondering what will come next. This album of nineteen tracks achieves the same, even after numerous playing sessions. There is loads of fire, passion and drive and perhaps even more importantly a deep understanding of these often ages old musical forms that are as natural to these talented musicians as breathing.
In terms of those nineteen performances on the album, everything oozes quality and authenticity, never slavishly copying the originals of long ago but being easily traced back to those days, with many of the tunes and songs as easily imagined being played at a Scottish highlands ceilidh as a hoedown in an old lost 'holler.' The female vocals on Pretty fair miss out in the garden are an excellent example, imbued with an incredibly strong feel of the untutored 'hillbilly' singers of old, beautiful but with a powerful otherworldly edginess, whilst the harmonies simply add to that old time feeling. Reeb and Nadine duet beautifully on Ain't got time, with melodic support from the banjo and mandolin on yet another song that powerfully echoes those now long gone days before the term 'country music' was even thought of. And yet, and this is where much of the virtuoso performances shine through, there is an underlying feel of modernity to this and many of the other performances on this genre defining collection that will enable listeners who wouldn't normally listen to old time music, to get pleasure from this album. There is even an authentic Cajun performance on Mon vieux wagon that is almost impossible to believe was not recorded eighty something years ago, similarly their stunning reading of Rose Connolly a performance that has never been bettered in terms of the atmosphere created of sheer unremitting sadness on a seemingly eternal 'Appalachian' murder ballad that may have had its roots in early 19th century, or perhaps even earlier, Ireland.
'Rock Island Grange' and indeed, the whole of their back catalogue, is 'hillbilly' (string band) music of the finest quality and authenticity played by a band that has few peers when it comes right down to musical quality. In fact the biggest difference between this album and the original 1920s recordings is the technological advances that have benefitted not only the band but also us listeners. Few modern bands are able to capture the pure essence of classic 'old timey' music without seeming to be mere copyists, itself a huge skill, but the Foghorn Stringband don't just seem to achieve that state but do so with huge respect for the old days and with enough originality to bring a freshness and clarity to every song on the album. 'Rock Island Grange' is a great achievement by a great band.