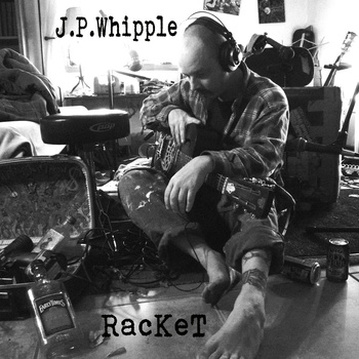 
Two albums in two months is taking even the word ‘prolific’ to unheard of extremes, whoever the artist is but when it’s John Whipple and his previous
tremendous album was released in 2009 you know that something different is going on and so it proves. It is only recently that I wrote a ‘rave review’ of his
early 2013 release ‘Ghosts,’ an album so different to most others that we may have to invent a new genre for this hugely talented ‘vagabond troubadour!’ I
didn’t actually say in that review that the man is artistically unique but I should have done because that is exactly what he is. There is no one around today that I know of to compare him to but in the case of this tremendous ‘lo-fi’recording I would say one of the spirits he evokes is that of the old medicine shows that very few (and certainly not me or him) have seen, but know them as something that was around in the late 19th and early 20thcenturies. The rawness of Charley Patton
and some of the other old bluesmen and‘hillbillies’ also come to mind, although very few of them could be considered one man bands, as John Whipple most certainly is.
What prompted this recording that is even more raw and eerie than those two previous studio albums was his audience at gigs, who are forever asking him if his albums reflect his live shows. Being an honest soul he had to admit there are differences, so decided to make a recording that he could hand on heart say did reflect him when playing live. So off he went with all of his various instruments such as banjo, lap steel, dobro, accordion and percussion set manufactured in his own words from ‘accordion cases, wooden boxes, license plates and
tambourines …… and there is still more to come.’ So is this recording up to the incredibly high standard he set with ‘Bible Milk’ and ‘Ghosts.’ You bet it is, and I say that as someone who loves those two albums! This recording is all about atmosphere and what an atmosphere there is. He has  created an album that in the words of the esteemed Greil Marcus, echoes ‘that old weird America,’such is the drive and intensity of this raw, at times quite sinister album. There are lighter moments to this fourteen song collection consisting of his own original songs, (none of which have been previously recorded) simply because his highly skilled writing tells tales of the world around him incorporating all of the comedic elements that entails as well as tragedy, booze, lost love and life on the wrong side of the tracks. The album title relates to how he sees his music, taking self deprecation to and probably beyond the limit, considering the incredible skill and originality that he brings to the blues/hillbilly area of roots music.
The album opens with the raw Blues For St. Mary with the sound of a beautifully played dobro dominating alongside his vocals, also including harmonica and castanets on a really good blues song. Devil At My Door is another strong blues story backed by dobro, harmonica, castanets and his own percussion on a tale that is reminiscent of so many of the old blues players but actually unlike any of them in particular! Won’t Come ‘Round No More is another powerful blues, this time led by an eerie old banjo sound and possibly a tambourine, whilst Corn Rows, again with an old timey evoking banjo, with stomp and percussion added, has the feel and atmosphere of an eerily evocative tale that could have been recorded 90 years ago. A strange haunting song that works tremendously well. Cadillac In Paradise with it’s slashing dobro and John’s echoing vocals almost takes eeriness to the extreme with this quite unsettling song and performance with the atmosphere only partially lifted by Red Lights, another tremendous banjo driven blues. The intensity is upped again with the slashing dobro and Johns raw throated vocal on 45 beers And Fox News, a blues song with an almost threatening atmosphere. All in all this is a tremendous album of mainly blues songs, but done in J.P. Whipple’s own unique style as a hugely successful example for fans of what can be expected from his live shows.
The even better news is that if you follow the link below you can download this tremendous album for as little as $5 and in any format from mp3 to flac! If that is not the bargain of this century so far I would love to know
what is. With all of it’s lo-fi faults, something that for me enhances the recording, this is a truly great album that any lover of roots music should own! Surely John Whipple’s time in the limelight is almost upon us.