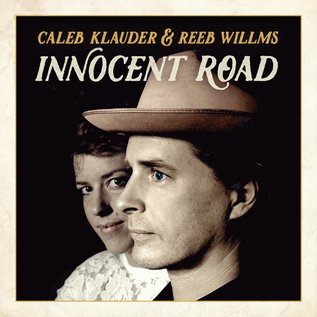 These two artists represent exactly one half of the tremendous 'Foghorn Stringband,' a band I've seen live on several occasions and who have on occasions worked as the 'Foghorn Duo' and the 'Foghorn Trio,' for reasons that should be obvious. Caleb has also recorded several albums with a lineup called 'The Caleb Klauder Country Band,' quite possibly a band that has more similarities with this duo that any of the Foghorn conglomerates do! Nearly forgot! This is also Caleb and Reeb's second album as a duo, following on from 2012s 'Oh do you remember' and he has recorded a number of solo albums! So he should be at home in the studio as well as in a live setting, something this tremendous album proves beyond all doubt. Obviously to be this prolific and varied a huge amount of talent is required, something Caleb has an abundance of. But wait, I'm talking about Caleb but his other musical half Reeb Willms is a perfect match for Caleb, both with regard to musical chops and with her wonderful fluid and confident vocal style.
The pair are helped out on this album by some huge musical talents in the form of Jesse Emerson on upright bass, Ned Folkerth on drums, Russ Blake on pedal steel and electric guitar, and Sam Weiss on fiddle, with Mike Coykendall engineering the sessions in Portland, Oregon. In many ways the fourteen songs on this album give us listeners the best of everything, with some tremendous Caleb originals that blend seamlessly with classic country songs by artists of the calibre of Buck Owens and modern country's Paul Burch all wrapped up with an all enveloping warmth and quality and a quite distinct edginess that sadly, at least for mainstream fans, could well keep it out of the mainstream.
So many of these performances have the warm, almost comforting feel, whatever the lyrics, of some of the old country and western swing songs of the 1930s to 1950s. The whole album captures the expertise and the great depth of feeling the musicians have for both the songs and the loose genre they are working in with a naturalness and joy in what they are doing that can't be faked. Part of the reason it works so beautifully is because both vocalists have a hugely confident untutored feel that somehow not only gives the recording tremendous appeal but also a very large measure of authenticity. Caleb's vocal style has the warm matter of fact story telling texture of someone such as the late great John Hartford whereas Reebs beautifully feminine tone is in a similar vein to some of the past greats. Untutored but with huge benefits!
The enthusiasm, drive and sheer musical quality is at times astounding on this recording that strikes me as a real throwback album that has echoes of the 1940s and 50s honky tonks in as much as it is a genuinely good time music that creates a tremendously  authentic atmosphere and the duo's obvious pleasure in playing music they love.
The recording gets off to a great start with Coming on strong on which Calebs vocal varys between the texture of a bluegrass singer and old rock 'n' roller. There is an excellent electric guitar sound aided by the fiddle and Reebs harmonies. The last time I saw you is another tremendous song; on this one Caleb starts on lead vocal with Reebs beautiful harmonies but then it turns into a 'classic country' duet as Reeb takes second verse, all supported by the weeping steel guitar, fiddle, bass and percussion. Reeb has her own unique and hugely appealing style but it is that powerful confidence and purity of tone that gives the comparison to some past greats a little credibility. On Montana Cowboy we are treated to another lovely vocal performance from Reeb on a mid tempo country song, with the usual peerless musical support that includes fiddle, bass, steel guitar, mandolin, bass and acoustic guitar. Finally, Just a little is another excellent duet on which Caleb takes first verse, with both singers supported by fiddle, metronomic percussion, throbbing bass, steel guitar and their tremendous harmonies.
Some of the publicity for this album has used phrases such as 'recapturing the magic of the traditional country duos!' I don't know about readers but that is something I always (and I mean always!) take with a pinch of salt and i'm rarely wrong! I was in this case though because for this tremendous album that phrase is a perfect, if too brief, summation of what is going on. It is genuinely a great album and whilst I have been a fan of everything Caleb and latterly he and Reeb have been involved with, I have no doubt whatsoever that this is at the very least the equal of anything either of them have done. Hopefully this recording is just the start and will signal the emergence of a modern duo who can be mentioned in the same breath as those greats of many decades ago! It certainly works for me!