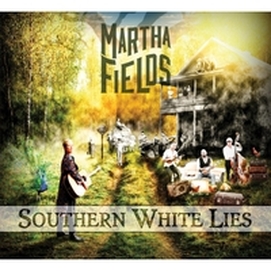 This mainly acoustic album has very much a laid back front porch quality but one on which the playing skills are perfectly honed and a long way from the old timey untutored quality of much of that 'genre' many decades ago. Fairly obviously the spontaneity of those far off hillbillies is lost but the melodicism is heightened to such a degree that someone like me, who loved the untutored hillbilly style, can be drawn in to these often exquisite sounds, but sounds that always have Martha's edgy vocal style drawing a variety of emotions out of some excellent songs
Martha Fields is an American singer, songwriter, guitarist who now lives most of the time in France where this excellent album was recorded. It was done with her hugely talented regular band of Manu Bertrand on dobro, banjo, mandolin and guitar, Urbain Lambert also on guitar, Olivier Leclerc, violin, Serge Samyn on bass fiddle and Denis Bielsa, drums. The harmonies, courtesy of Travis Fite and Monica Taylor were added in Tulsa then mixed and mastered by producer Tommy Detamore, in Floresville, Texas. Quite a mix of locations but don't worry, none of the disjointedness that might have been expected from using such a variety of locations for the work applies to this excellent recording.
The playing is superb, with every one of the musicians having a strong feel for the edgy country music contained on this disc, something many people will find difficult to comprehend, but if Martha had used musicians born and bred in the country music areas of the U.S they could not have bettered the playing we can hear on this recording. Similarly the arrangements, something many people slip up on, are absolutely perfect for purpose. Add to that Martha's strong, hugely expressive vocal style and it's difficult to see how this album won't sell in large quantities, even without huge sums of promotional money and I think anyone hearing even a couple of tracks will be immediately smitten! Martha's songs are beautifully written, with some often intensely dramatic story lines and memorable melodies, both aspects staying with the listener long after the album has finished playing. All of the songs were written by Martha except for three excellent covers that blend beautifully with her own writing. They are Janis Joplin's What good can drinkin' do, the traditional Lonesome Road blues and there is also Jimmie Rodgers California blues. No doubt, some will describe the album as 'bluegrass' but it has much more of a high lonesome mountains atmosphere than the, in many ways limiting, bluegrass description depicts, ultimately giving the recording a much stronger sense of originality. Much of the recordings appeal for many people will be the fact that the album, even with its 'edginess,' could easily cross over into the mainstream given a chance.
Southern white lies contains a powerful story of a family's suffering, with a mournful fiddle, melodic dobro and excellent bass driving the story along in support of Martha's lyrical depictions of the harsh reflections of the songs lead character. The lovely banjo and dobro get Do as you are told, a haunting tale off to a spooky start on a powerful story, again tied to the hardship of life for some people with the fiddle meandering its atmospheric path through an excellent story song. Janis Joplins What good can drinkin' do gets a strong country treatment on this kick against the drinking culture that is wrapped up in an excellent story with the melodic bass, dobro, fiddle and percussion adding perfect shades of colour to a song that whilst rolling along at a just about mid tempo has an upbeat feel that is perfectly evoked by Martha's attacking vocal style on an entertaining song that many will see as having a message! (not me though!) Lonesome road blues gets underway with a lovely speedy banjo intro on a song that is a beautiful depiction of an old front porch hillbilly gospel song. Adding to the sound quality is a chiming mandolin, the ubiquitous (but essential) bass and another excellent vocal from Martha. Finally; there is a gorgeous dobro lead on California blues, with chugging percussion, bass and fiddle and some excellent harmonies alongside Martha's evocative vocal on an upbeat up tempo song.
Despite the appealing melodicism of the songs, mainly brought about by the arrangements of instruments, there is plenty of grit, with a powerful drag on many emotions from nearly all of the twelve songs on this excellent album. Those, along with the superb playing, are the elements that set this tremendous album way above the smooth soulless 'country pop' that often gets churned out as 'country music.' In many ways artists and albums such as this are why I do what I do with radio shows and this website. 'Country music with an edge' pretty much defines mine and what seems to be an ever growing band of like minded souls tastes and this album is as good an example as most!