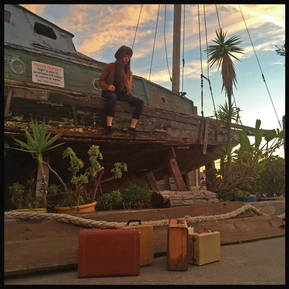 Contained within this extraordinary new album by Pony Hunt are elements of blues, country, old time hillbilly, 1950s and 60s girl groups, an almost indiscernible jazziness, a touch of rhythm and blues, a 'smidgin' of psychedelia and no doubt when I have listened to the album even more, much else besides! Strangely, I get the impression that all of those elements are probably unintentional, perhaps unwittingly or sub consciously used simply as elements of Pony Hunt's influences that have been absorbed from birth. They are blended to such a degree that any solidity of genre is lost; becoming just distant echoes that have the listener knowing nothing is contrived. It is all down to Jessica Antonick's experiences and musical influences, all coming out in a virtual flow of consciousness bringing together a unique blend of a large number of disparate elements into a hugely appealing, almost addictive, whole.
There is a beautiful natural femininity to Jessie's vocals, whilst her also beautiful guitar sound has a deep delta blues flavour and whilst the melodies are gorgeous and the vocals gentle there is often a slightly sinister, occasionally otherworldly edge to her songs. It's difficult to really define where it comes from but the atmosphere is one of the many highlights of this excellent recording. Whilst everything on the album has an innate beauty in its gentle, slow moodiness, where it really wins out is in the strange edgy sense of drama that runs counter to the beauty, with the two elements heightening each other like very few, if any, albums I've heard before.
Jessie is based in Oakland, California where she leads an incredibly creative lifestyle with her work as seamstress, woodworker, sailor and singer, songwriter; I'm pretty sure that, thanks to the quality of this debut recording, the latter two will soon consign the former to history following the undoubted success of this album. Most of the album was recorded in New Orleans whilst the balance was in Oakland, California. Jessie was assisted by some talented musicians, herself handling all lead vocals, drums on a couple of songs and Rhodes on one track. The gifted Chris Cummings played lead guitar on most songs; Teri Sage provided beautifully atmospheric backing vocals on many of the songs, with Sam Doores (of the Deslondes) playing piano, guitar, drums, harmonica and backing vocals. Max Bien Kahn played upright bass on four songs, Dan Cutler, electric Bass, Lyle Werner, violin, and Rachel Meyer on cello with the latter three just playing on one track each. I've mentioned all of the musicians simply because they all left their mark on this generally sparse recording despite the avoidance of any unnecessary histrionics. That sparing use of instruments serves to emphasize the strength of the songs, highlighting Jessie's confidence and commitment to the tales that she weaves on this album that really gets under the listeners skin (and stays there!) from the off.
The album opens with some gentle percussion and melodic guitar on Over you, giving  the song a slightly eerie start, in a similar way to much of Rachel Brooke's music, and when Jessie's vocal comes in, despite the gentle beauty of her voice, the edginess is maintained and in some ways heightened by the 'girl group/doo wop' harmonies. The song never strays from its slow moodiness but sometimes there are little instrumentation changes that give it a much broader scope. A gently chiming guitar and dobro signal the start of Without a fight, another slow moody tale with the character laden gorgeous lead vocal to the fore backed up by the lovely harmonies, with harmonica bringing a slightly different perspective to an album that I still think can only be loosely compared to Rachel Brooke but no one else that I can think of! The metronomic synth chimes open Lay me down, another beautiful slow burner with the accompaniment of angelic harmonies before Jessie's vocal comes in on a song that is even slower than those preceding it despite having the same powerfully melodic, haunting atmosphere. It builds very slowly gradually adding to the instrumentation without ever affecting the slow, mournful tempo on this song that never builds to any sort of crescendo but is beautiful none the less. Hand claps and foot stamp percussion introduce us to Sun rays, with gentle acoustic guitar leading Jessie's lovely haunting vocal in on another strange otherworldly song, although as with most other songs on this album that otherworldliness takes on a variety of dimensions, never sticking to the same world!  It seems to be something that comes so naturally to her that there is never any duplication of atmosphere, just a slightly varied and strange uniqueness.
This is a hugely atmospheric debut album that in many ways can slot into just about any popular music genre but is not really suited to any of them, hence my adoption of it under the 'American Roots umbrella! It is also quite frustrating, but don't worry, it's simply because it is her only recording so far and I find myself wanting to check if this disc is actually representative of her work. It's strange how an album that seems to be based around an often soft, mellow sound at the same time seems able to generate a gentle sensuality that contains an undercurrent of power and depth; perhaps further evidence confirming the uniqueness of Pony Hunt.