CHARLEY CROCKETT - LONESOME AS A SHADOW 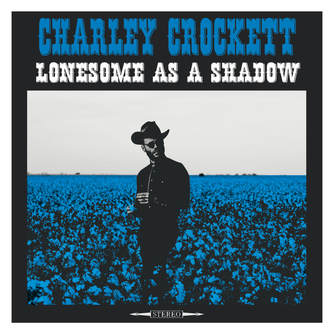 When we talk about the very best country music having a lot of soul in the mix Charley Crockett's new album 'Lonesome as a shadow' could be what we have in mind, in fact this album pretty much defines the term! He doesn't have 'perfect pitch' but far more importantly he possesses a voice that is able to evoke myriad emotions with its warmth and soulfulness that was honed on the streets of New Orleans, Paris and any number of diverse locations throughout the U.S, Europe and North Africa, something that even after just one listening session came as no surprise. To be perfectly honest we shouldn't really refer to Charley as a country musician; he may be adept at his version of country music but there is a deep bluesiness and the already mentioned soulfulness in all of his music. Of course if we are going to label him, something that anyone hearing the album will in all probability be unable to do with any degree of accuracy, we will need to include a little of that New Orleans gumbo which he certainly has, a Louisiana swampiness, a strong honky tonk sensibility and quite literally bits and pieces of influences he picked up on his 'world travels.'
This is Charley's fourth album and follows on from his 2015 debut 'A stolen Jewel,' an album that won him a Dallas newspaper award as 'Best Blues Act,' despite its stylistic mish mash that also included country, jazz and even gospel although like this album there was certainly blues in its makeup but no particularly dominant style. 2016 saw the release of the also excellent 'In the night,' another much lauded album that contained all of the above mentioned generic styling's but was still fairly ambiguous, that is other than sitting in the centre of Charley's rootsy genre of one! Then in 2017 he released yet another tremendous recording entitled 'Charley Crockett presents Lil G.L.'s Honky Tonk Jubilee,' an album that was pure country and included songs by the likes of Ernest Tubb, Hank Williams, Roy Acuff, Loretta Lynn and more, proving beyond all reasonable doubt that he can pretty much master any roots style thanks to his eclectic travels and total lack of stylistic border recognition.
This album was recorded in Memphis at the legendary Sam Phillip's Recording Service with Production duties carried out by Matt Ross-Spang with Charley's travelling band, the Blue Drifters, for support and all of the songs were penned by Charley.
It was impossible to pick favourites from the twelve excellent compositions on this album, but I'll mention a few starting with The sky'd become teardrops a lovely country song with a beautiful weeping steel guitar and suppressed organ, with Charley's soulful vocal backed up by percussion, throbbing bass and occasional twangy guitar. Ain't gonna worry child has a nice soulful keyboard and guitar sound with gentle percussion and throbbing bass on a powerful song that even includes some brass for a little variety. This is one of those songs that contains little if any country but a whole lot of soul. Despite the mix of instrumentation the sound always creates a lovely spacy atmosphere. The piano, shuffling percussion and bass get things underway on If not the fool, soon joined by Charley's soulful vocal and restrained chiming guitars on a song that gradually builds to a gentle mid tempo with the guitars taking over the lead whilst still allowing plenty of vocal space. There is a strong organ presence supporting Charley's soulful vocal on Help me Georgia, often with a brass intervention, a combination that works really well, in some ways bringing several strands of roots music together, always propelled by the metronomic bass and percussion.
Whilst I've said Charley is 'stylistically ambiguous,' that is not really true. The fact is that each of the songs he performs has easily traced roots in one style or another, be it soul, country or blues but because of his absorption of musical styles there are always traces of other influences that have leaked into the songs ensuring there is no one he can really be compared to. In a nutshell he is very much his own stylist who wears his influences well but is a slave to none of them. Long may he continue to make these excellent diverse albums. Now all we need is for this talented, unique artist to add the south of England to his list of places he has travelled to!