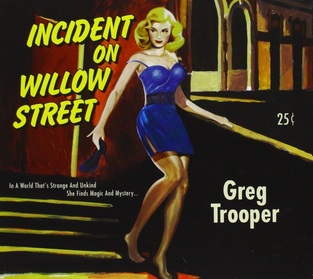 This tremendous album covers a broad canvas stylistically, with it’s tap root in country music but with so much more included. There are classy, edgy country songs, excellent country rock, terrific rootsy rock & roll, all  built on great song writing, tremendous arrangements and playing and sung by just about the most evocative vocalist around. The man should be a household name! So why exactly isn’t he? This is where you should stumble across something clever and insightful but to be honest, like all of his many fans, I can’t find any reason, unless of course (perish the thought!) the general public are more interested in ‘wallpaper music’ that can be ignored/listened to at will. One thing is for sure you certainly can’t ignore music of this gripping quality.

Greg Trooper is able to project everything from intense drama to a lovely lightness depending on a songs requirements. Any artist who can do this is well worth your listening time but when you add the fact that Greg is one of the very best songwriters around and has been for a long time, the listener is in a win win situation! Despite the variety of generic leanings musically, thematically it is very much an album with relationships at it’s core. If it was just simple love songs it would still be a terrific album but this contains so much more with it’s exploration of not just love and lost love, but in many cases the ups and downs and the reasons for whatever besets the subject of the song, often leading to his emotional downer.

His vocals sometimes bear a similarity to Tom Petty, at others a little of Gene Clark is detectable, in fact his songs whilst thematically less dense, appeal on a similar emotional level to this late great singer songwriter. His ability to inhabit his own songs with a powerful atmosphere and strong emotions when called for, ensures the listener breathes just that little bit deeper. That strong emotional content is something that has applied throughout his career, with his albums often providing a real roller coaster of emotions that hover on the edge of spilling over into a world most us us have experienced at some stage, perhaps resurrecting a few ghosts. This is thanks in the main to the lyrical poeticism and his strongly evocative and melodic vocals that are able to lift the songs way above most of his peers. Many singers are capable of vocals that appeal on a powerful emotional plateau but very few can bring it to every song. Whilst I currently think this is his best album, I’ve said the  same about each of his previous ten releases, certainly the ones that I have heard, spread over the last couple of decades or so until the next one comes out! After just a few listens, the melodies are so warm and memorable that each play ensures the album takes on the feel of meeting a very dear old friend, who always has a slightly different and interesting perspective to whatever they have to say.

This is one of those albums that any choice of songs to be commented on can be picked at random thanks to the incredible quality. Good Luck Heart includes a lovely mandolin, chiming twangy guitars, harmonica and Greg’s evocative vocal on an excellent mid tempo song that includes a little banjo on a double edged end of love song! Steel Deck Bridge is a stunning exercise in raw emotional balladry with it’s lovely deep twangy guitar allied to steel guitar and Gregg’s emotive vocal making this tremendous, atmospheric ballad a real roller coaster of emotions. Mary Of The Scots In Queens is a cleverly conceived song that has a strong Celtic folk element to a tale that tells of a love he lost to another man! The atmospheric fiddle enhances that celtic connection, but is not a song you are likely to hear at a ceilidh! With it’s lovely melodic guitar and keyboards Everything’s A Miracle is a slow moody love ballad that is not overdosed on sugar, instead emphasizing some of the ups and downs in a simple way. This song again includes a lovely steel guitar which adds to the already powerful atmosphere. The Girl In The Blue almost has a Tex Mex feel on the tale of  two friends trying their luck with a couple of girls, with our hero choosing the ‘girl in the blue,’ on a nice upbeat piece of light melodrama! Finally, Diamond Heart is another beautiful country song with lovely melodic fiddle, piano and Greg’s easy going vocal expressing his forsaken love.

Greg Trooper works in a loose country/roots genre that is overcrowded with talented singer songwriters. A list of people at the peak would almost go on into infinity such is the class on offer, but if you want just one album that is an exercise in deep heartfelt quality within that genre buy this tremendous recording. Be warned though. After listening to this brilliant album you will certainly be looking to spend more money on the peerless Greg’s back catalogue knowing by then that you have an album in your possession that will inevitably figure in many years end lists, not least, mine!