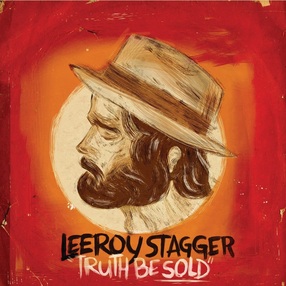 
By my reckoning this is Leeroy Stagger’s eighth studio recording since his 2004 debut ‘Dear Love,’ although there was an e.p in 2002, so compared to many he is quite prolific, especially when you bear in mind that there have also been a couple of live recordings in that time. I’m not familiar with everything he has done in the past but do know enough to realise that he is an incredibly inventive songwriter and vocalist who is just as happy on a mellow country ballad as he is on a punked up roots rocker! When I say mellow, this is only musically, very often the lyrics have a darker side, just to let you know he is not trying to knock on the Nashville door! He likes to jump about when it comes to subject matter as well as musically, so no one will ever peg him into a tidy little generic slot. Often he is placed under the alt. country umbrella and it is true that some of his songs fit nicely, but only some, the remainder having elements of just about anything that can be classed as roots music, including on this album, at least a couple that are quite heavy roots rock.
Apparently some of the songs on the album were written recently and some were selected from demos he has made over the last few years, with Cities On Fire having been written about eight years ago. In some ways it shows, with subjects ranging from intense tales of protest to tender love ballads and the myriad of emotions and philosophies experienced in life. It’s almost as if this is a compilation of where he’s been and where he is now, but it all holds together incredibly well thanks to the excellent production and Staggers own ability to portray the songs, irrespective of emotional content, proving he is a master of many styles. The album was recorded in Portland Oregon’s Mystery Machine Studios, with production duties carried out by Grammy Award winner Steve Berlin of Los Lobos, who has spoken highly of Canadian, Staggers great musical abilities.
The lead vocals and harmonies are always excellent irrespective of subject matter or tempo, although
it did strike me that on occasions the vocals are a little too far back in the mix. The playing by all concerned is also exceptional as is the songwriting that allows his expressive vocals to get the best out of a variety of tempos, subject
matter and styles from heavy roots rock to mellow alt. country. Leeroys core band consists of him on all lead vocals, Evan Uschenko on guitar, bass and vocals, and Nick Stecz on drums and percussion, but on this album Berlin plays
keyboards, midi and baritone sax, with Brian Daste on pedal steel and Indio Saravanja, harmony vocals on Mister.
The quality of every song on the album is so high it’s difficult to know which ones to write about and which to leave out, but if, as I hope you will, you buy a copy of the album and play it to death as I have, you will see exactly what I mean. Album opener Memo starts with a heavy rock guitar line as if we are about to hear one of the myriad heavy rock bands, something many of us are happy to do, but if you are not, stick with this tremendous song because the intensely dramatic lyrics and fiery dark heavy instrumentation will gradually draw you in. This is followed by Goodnight Berlin on which there is more heavy instrumentation on a really good descriptive song that basically sums up the less glamorous side of life for a travelling musician who is missing home and loved ones, tinged with some sadness at leaving new friends and places. Suddenly, after the intensity of the first two songs we are faced with a gorgeous chiming guitar led ballad that completely changes the albums feel. This is Celebrity, and although there is still an intensity in the lyrics it’s one that has some of the edge smoothed off with Stagger’s reflective, evocative vocal shining brightly on a tale that shows not everything about the celebritity life style is worth having. It’s back to the fiery intensity on Cities On Fire a hard driving punked up rootsy rocker with dramatic chugging guitars on which Leeroy, with excellent literacy, projects his disgust at the world we find ourselves in on this powerful song of protest. Next is Break My Heart, another gorgeous ballad, this time with a strong country feel,
thanks to the steel guitar, on an almost mellow love song that contains a much deeper story and has the feel of Whiskeytown era Ryan Adams in mellow reflective mood and at his most literate. A gorgeous song that unlike most simple ballads has considerable depth. Sold Down The River is another terrific country ballad with gorgeous steel guitar, excellent vocals and harmonies on a song that lyrically is considerably less mellow than it is musically and comes as a warning of some of the pitfalls that have to be faced in the music industry and in many ways, life! This is how the album continues, veering between mid to high tempo ‘rockers’ and gorgeous ballads and many points inbetween but all containing a literacy and musicality that few others are capable of.
I wouldn’t even say that I like every song on the album. It’s difficult to like everything when the musical
scope that is covered is so broad and diverse, but overall I love this great recording simply because of the huge musical talent that Stagger possesses and conversely, that incredible diversity!