CAHALEN MORRISON AND ELI WEST –
THE HOLY COMING OF THE STORM 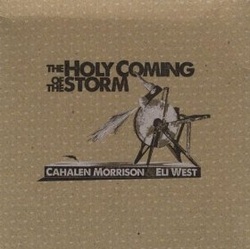 Whilst there are certainly elements of the ‘high lonesome’ sound that is bluegrass, (a label this duo often seem to get saddled with) anyone buying this tremendous album and expecting it to actually be a straight forward bluegrass recording will get a shock, albeit a rewarding one! Certainly the instrumentation is that which is used in bluegrass, being mainly fiddle, mandolin, acoustic guitar and banjo along with, on occasions, double bass but probably the most accurate description that I’ve seen so far is ‘new old-time.’ And yet, even this doesn’t really do such an unusual album justice.

The music seems to be built on the foundations of that slightly spooky almost sinsister strain of old British Isles folk music that slowly incorporated other influences and developed into the high lonesomeness of the early hillbilly recordings and as a consequence, always seems to be of another time! The writing is of an era long since gone, with it’s sometimes difficult to unravel poetic lyricism and language that is at times a throwback to a barely post Shakespearean age! Follow the lyrics, something anyone listening to this album will be drawn to, and you will see what I mean. It is almost as if they have found some old unknown folk songs from the 17th century and recorded them. There is a poeticism to every song that at times is quite mesmerising. On first listen it seems to be a music rooted in the early 20th century. It is only with repeated listens that you realise many of these stories could relate to the now romantic notions of 18th and 19th century dramas. The songs themselves evoke the old time tales of lost love, sea travel on the sailing ships of the past, a cowboy love song, even managing to fit in a little of the old time fire and brimstone gospel, all done with a chilly, at times dark, atmosphere. The sad mournful  ‘cowboy love song,’ My lover, adorned, is a case in point with ‘Though dark grows the thunder no lightning begins, for my young lover no blessings did win, being a sentence few old cowboys would have been capable of uttering!

Two of the songs are traditional, the instrumental Kingsfold and I’ll not be a stranger, whilst writing credits are shared by the duo on My lover, adorned and the instrumental Cutting in/Weymann’s last run, with the remainder all being written by Morrison. The fact that we have some beautiful playing adds to the power of the recording, with acoustic guitar never far away and haunting fiddle and banjo always giving great drive to these excellent songs. It is apparent that a perfect sound was not the most important criteria on which this album is built simply because, whilst the playing is very good there are little gliches that seem to add to the charm of the album, giving it a live feel. Add in the always excellent vocals and with their almost spectral harmonies adding even more atmosphere, this album pretty much epitomises old time traditional music but gives it a 21st century lift!