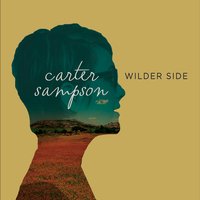 To be honest I stumbled across this album purely by chance. I receive dozens of new albums for review or radio play each week, hard copy and download, so as readers can probably imagine selecting recordings is often a game of chance. 'Wilder Side' by Carter Sampson looked interesting and her name vaguely rang a bell, although I didn't know why, plus the fact that I've been listening to a lot of music from Oklahoma, her home state, recently so as I had a half hour to spare thought I would give it a listen. I'll be eternally grateful to that chance that led me to this incredible recording. After many plays it just keeps getting better and better, putting it on a par with some of the very best recordings of the decade (and possibly century!)
There have been a few women singer songwriters within the loose generic roots field that is allied to country, Emmylou, Nanci Griffith, Lucinda Williams, Rachel Brooke and just one or two others who you get a buzz from with most of their recordings. To that small but influential and significant club we can now add Carter Sampson
Her voice exhibits huge confidence and a purity that matches Emmylou Harris but what lifts her further is that there is an attack and often an edginess that very few can match. Despite that 'edginess' there is stunning beauty and an ability to manipulate her character laden voice to suit any situation from up tempo country rockers to beautiful mellow ballads.
Make no mistake, this would have been a great album if the support had been less effective but huge credit also has to be given to engineer Travis Linville who fulfilled his work in Norman, OK, similarly Trent Bell who mixed the recording at Bell Labs also in Norman, OK and Garrett Haines who did the mastering at Tree Lady Studios in Turtle Creek, PA. All of those talented people did their part in helping to lift this recording to the stratospheric heights that it has achieved. Of course whilst they were essential to the quality they are Carters songs and her vocals that actually define the recording. Carter herself takes all lead vocals and plays acoustic guitars, whilst Travis Linville played electric guitars; bass, drums and pedal steel with John Moreland, Ali Harter and Carter herself added backing vocals with Ryan Jones on keyboards.
By my reckoning this ten song collection of beautifully written Carter originals is her fourth full album release on top of which there was also 2013s excellent five track e.p 'Thirty Three.' I thought it was her third album until I found an early recording, 'Fly over the moon,' a recording that gave warning that another huge talent was beginning to emerge and blossom in Oklahoma.
It almost seems insulting to those not mentioned to select a few songs to give the reader a taste of what to expect when they purchase their copy of this terrific album but needs must I suppose! Highway Rider is a gorgeous, slow reflective tale that, as with every song on this album, creates a unique atmosphere with its gorgeous melodic guitar and some excellent harmony vocals from another favourite of mine, John Moreland, with the metronomic percussion that laid such a perfect foundation on which this tremendous song could be built. Holy Mother is a lovely mid tempo country rocker with its lovely chunky chopping tempo and beautifully melodic guitar sound enhanced by lovely harmonies that blend beautifully with a powerful attacking lead vocal from Carter that is full of a dynamic edginess. There is an acoustic guitar intro that is soon joined by Carters powerful but beautifully feminine vocal on Everything You Need, soon added to by excellent restrained percussion and keyboards with melodic chiming dobro on another beauty of a song. We are treated yet again to a gorgeous lead vocal and harmonies on Medicine River a beautiful slow moody song that can almost be described as 'classic country and western' with its lovely dobro sound on a sparse but beautifully evocative and descriptive tale. Finally, Take Me Home With You is a beautiful ballad with excellent restrained percussion, gorgeous steel guitar and Carter's hugely evocative vocal. It is rare that a song as sparse as this gorgeous rendering contains such an evocative power but this one certainly does, mainly due to the beauty and commitment of the vocals
Sometimes you stumble across a recording that you feel is destined to become part of your life for a very long time. It may be a little early to say it, but I would be very surprised if this is not one of those very few albums. Now I'm going to treat myself to a full investigation of her back catalogue. I'm drooling at the prospect!