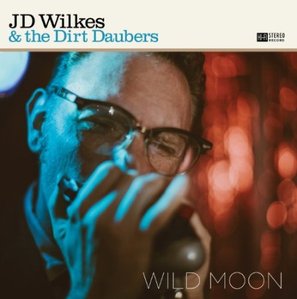 
I’ve been looking forward to the release of  this new recording for some considerable time now, having loved their previous two albums and I’m delighted to say that, whilst different, this one is far from disappointing! It is certainly a departure from what we’ve come to expect from the Daubers but is actually not a surprise knowing J.D. Wilkes background as a founding member of the extraordinary ‘Legendary Shack Shakers’ who blend just about every roots music sub genre into their very own stylistic mix. On the previous two Dirt Daubers recordings the content was very much acoustic old timey or hillbilly music, whereas this new album is rooted in electric blues and early rock ‘n’ roll. Of course with this extraordinary band nothing ever quite allows you to affix a nice neat label to them!
The band consists of J.D. and his wife Jessica Wilkes plus the incredible electric guitar playing of Rod Hadallah (also a ‘Legendary Shack Shaker’) and drummer Preston Corn. It would be easy to say this is an album of blues and rock ‘n’roll, but again, it’s not that simple. Certainly the album includes those two genres, often blended, but with the idiosyncratic force of nature that is J.D there is a strange otherworldly atmosphere to much of the proceedings. Of course the other three members contribute massively to their overall sound with Corn’s drumming laying a foundation that is as solid as any and more solid than most! Guitarist Hadallah’s dexterity and fearsome drive on a variety of tones and tempos has to be heard to be believed and in many ways defines the attacking sound of the Daubers. J.D and Jessica share lead vocals on the twelve songs, with the opening track being a short but succinct instrumental with harmonica and guitar, that gives the listener a clue that what is to follow is not ‘easy listening,’ but is an incredibly pleasurable listen! Jessica’s lovely expressive vocals often have an almost indefinable jazzy feel to them and are chock full of character and versatility irrespective of genre and whilst very few can match J.D. for commitment and drive this pair seem to lift each other and the other two band members to even more extremes of fieriness and raw power.
We get underway with the already mentioned instrumental French Harp Hustle a combination of J.D’s harmonica and Rod Hadallah’s fiery slashing guitar going some way to preparing the listener for what is to follow.
On the excellent title track Wild Moon J.D leads the way with a vocal that is relatively restrained on a slightly
sinister swampy blues song on which he has the chiming guitar for company on a tale that often evokes a delta crossroads around midnight! Jessica takes lead vocal on No Rest For The Wicked a terrific punchy raw blues and what a lead vocal it is with her fiery expressive voice accompanied by J.D’s wailing harmonica and Rod’s incredible guitar dexterity all built on the powerful drum beat, a combination that drives the song on. This is followed by another lead vocal from Jessica on No More My Love a piano led bluesy jazzy song that starts off in quite a
restrained manner but gradually flows into a more sinister atmosphere with the help of the electric guitar. The storm after that relative calm is provided by J.D’s vocal and harmonica on Angel Crown a song that is part blues, part rock ‘n’ roll, but all power and passion, with the dirty swampy guitar, bass and drums. Hidey Hole again has J.D on lead vocals on a song that has more of a rock ‘n’ roll feel, although that swampy guitar sound that blends perfectly with harmonica leans more towards a dirty blues, all driven on by the excellent heavy foundation laid by bass and drums. Following this is another Jessica lead on Don’t Thrill Me No More, another powerful bluesy rock ‘n’ roll song with saxophone and that swampy guitar, plus piano, bass and drums, although the instrumentation never overwhelms Jessica’s powerful vocal.
There was a clue to this change of direction earlier in the year when I saw them play the ‘Live set of the year’ so far, during which they performed electric guitar driven music with a bluesy rock ‘n’ roll slant rather than the
acoustic‘hillbilly’ of old. Such is the enormous talent within the band that they can master pretty much any musical form within the ‘roots’ genre. Ultimately whatever they choose to play it is always recognizably the Dirt Daubers and as such well worth your listening time (and money!).