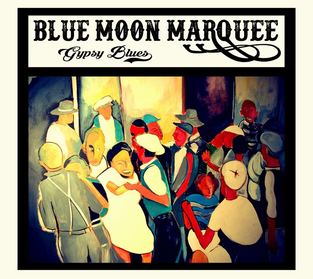 I reviewed Blue Moon Marquee's previous offering 'Lonesome Ghosts' in 2014 and was absolutely knocked out by its incredible quality and the fact that it reaffirmed my long held belief that the blues still has much to offer in terms of originality and its broad scope. In fact in many ways that album, their second, whilst weighted towards the blues end of the scale, also absorbed elements of jazz, ultimately leaving me wondering how they could possibly follow an album that good.
This talented Canadian duo of A.W. Cardinal, vocals and guitar and Jasmine Colette (a.k.a. Bandlands Jass) on vocals, bass and drums, have not only followed it but actually upped the quality by a notch with this tremendous new release 'Gypsy Blues.' All twelve of the albums songs were written and arranged by the duo and the recording was carried out at Afterlife Studios in Vancouver, British Columbia.
Some of their named influences are artists such as Louis Armstrong, Blind Willie Jonson, Charley Patton, Big Bill Broonzy, Tom Waits, Memphis Minnie, and Django Riendhart. The Waits influence is hardly surprising when you bear in mind A.Ws vocals and when you think about the other artists it is obviously as accurate a bunch of influences as anyone has ever laid claim to. Despite that and the links Blue Moon Marquee have their own completely original style that has obviously been helped to develop by those influences but there has been no attempt to emulate or copy. It is one of those recordings on which their musical roots are obvious despite not really sounding like any of them; as I said, they have their own unique sound and whilst it is sparse; just guitar, percussion and bass, the sound is full and varied without ever sounding monotonous or tiring.
Things get under way with a melodic jazzy guitar, bass and percussion intro on Trickster Coyote and are soon joined by A.Ws raw 'Waitsian' vocals on a song that eventually is heard to be an obvious blues and one that conjures up the whisky drinking persona of someone living life on the wrong side of the tracks. That is immediately followed again by the lovely melodic jazzy guitar sound that ill prepares the listener for A.Ws raw vocals but the two are absolutely essential not just as contrasts but as a major contributor to the songs that are predominately dark, with Jasmine's percussion and bass foundation allowing the guitar to go off at its melodic tangents on a song that tells of the hopelessness of trying to avoid falling for the Hoodoo Lady! The melodic guitar gets things going again on Runaway Lane, soon joined by bass and percussion on a song that tells a 'colourful' story of being left behind by a lover who was sick of his drinking and gambling, with A.Ws vocal having even more of a Waitsian sound, albeit completely natural, after all, why would anyone deliberately sound like Waits?! Ain't no stranger is a slow moody blues with nice percussion and bass and the guitar that sounds a little like Albatross era 'Fleetwood Mac' and then we get the songs biggest surprise. After all of the Waistsian male vocals, here we are treated to a beautiful jazzy blues lead vocal from Jasmine on a gorgeous 'late night' song. Finally, Spy Hill has the usual instrumentation of guitar, percussion and bass but the background vocals have a spaghetti western feel that leads in to A.Ws lead vocal on a slow moody, emotional tale of a man leaving his young son to spend what promises to be a lifetime in prison. Eventually the background vocals come more to the fore led by Jasmine, before fading again.
On the strength of 'Gypsy Blues' and its predecessor (I've yet to hear their debut recording) modern blues doesn't really get any better than this. The old influences are all there as is the depth of feeling and the often raw and sometimes harrowing stories but ultimately they have genuinely updated the genre for the 21st century and created their own unique blend. To achieve this everything is underpinned by Jasmines bass, and percussion that allow A.Ws beautifully melodic and fluid guitar work free rein. When it comes to vocals there is only one man in the modern day whose vocals really bear comparison and he doesn't seem to be doing much recording at the moment, but also despite only being on one song, Jasmines beautiful, atmospheric lead vocal is quite revelatory. Instinct tells me we need more of her vocals on future recordings whilst not wanting less of A.W, so how about a double album!
This is a tremendous album by a hugely talented and unique duo who have found a way to update an ages old musical genre for the new century whilst remaining true to their roots and the genres originators.