​​Erika Lewis - A Walk Around The Sun 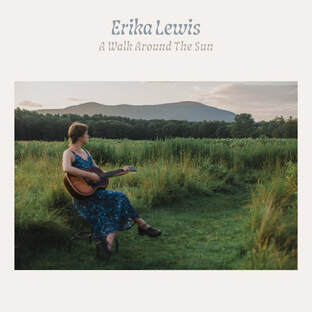 A Walk Around The Sun is a country music album that contains beautiful, catchy melodies and hooks, hugely expressive feminine vocals and just about perfect arrangements. Not at all the music that many fans of Tuba Skinny would expect from Erika unless you were intrigued by her vocals with the band and did just a little research. You would then discover that she has made several solo ‘country’ recordings, this being her second album and follows 2016s Waiting for stars, plus there have been a couple of recent singles and there was even a seven track e.p. back in 2013. I mention those recordings because first listen to this beautiful ‘pure’ country recording is certain to prompt all who hear it to purchase her previous recordings. And then of course there are the albums made with the mighty ‘Tuba Skinny’ a band that she was, and still is, involved in. The uninitiated will discover that they are most definitely not a country band but are equally certainly a highly original and hugely talented New Orleans traditional jazz band, but with their own take on the ‘traditional.’ They started out as a ‘pickup’ band and played the streets of that musical melting pot, something they continue to do, despite successful tours and an incredible back catalogue of recorded music that includes this years brilliant Magnolia Stroll, on which Erika adds some of her vocal and bass drum expertise!
But let’s get back to this stunning recording. To be honest if Erika sang the telephone directory (remember that?) I would buy it. I can’t imagine there is anything she can’t sing. Just listen to her jazz chops and the depth of feeling she puts into them, and then when you get to her singing of country songs she is up there with the very best, and probably ahead of most of them! I’m pretty sure that the more disciplined sounds of A walk around the sun will bring her more to the public attention than perhaps the jazz will, but what a talent!  Her style and quality has much in common with some of the past greats of any genre, but really Erika, perhaps because of her switches between jazz and country, is completely her own stylist, having found her own open totally unselfconscious way during those ‘dues paying’ years. She always seems in complete control of her voice, an instrument that can go from belting it out to a subtly appealing languorous sound.
We often talk about ‘characterful’ vocals, a quality that adds that extra depth of feeling, lifting an album of beautiful vocals to a higher level, something Erika Lewis has an abundance of. When listening to her you can feel the soulfulness oozing from her voice and can’t help but feel that she could very well have lived some of these songs and the wounds or triumphs that go with them are still very real, in fact she almost seems to be living them as she sings. She puts everything she has into every song and throws herself at every note knowing that if she loses that note the emotion will carry her through, but she never does lose it and often you will find yourself listening to the sound of her beautiful, character laden voice and not actually taking too much notice of the melody or lyrics. But when the listener is able to expand their listening to include the lyrics and melody what a treat! Great songs and beautiful melodies with the bonus being that despite the originality there is often a familiarity, almost as if you’ve heard them before, but you haven’t, it’s just the warmth and timelessness that gives the feeling of listening to an old friend.
All eleven songs were written by Erika, each having a ‘classic country’ feel despite elements of offshoots such as Folk, Americana and even a little swampy ‘Green Onions’ feel on ‘Unsatisfied.’ It’s not laziness, but it would be churlish to pick highlights, every song and performance being of the highest quality. They are built around various aspects of love, from love found, love lost, perhaps love souring and love being questioned, all performed at a slightly faster or slightly slower mid-tempo. What heightens the appeal, almost beyond a five-star rating is the fact there is nothing extraneous in the arrangements. There is no studio trickery or over the top string orchestra to deepen the sound. Every instrument is essential to the sound, allowing everything to be about the song and Erika’s beautiful vocals. I can’t even think who her voice or songs remind me of, perhaps an amalgamation of everything I’ve heard through life being defined on this one album. Who knows? But this is a hugely appealing recording that I’m very unlikely to ever tire of. Purchase it and I’m pretty sure you will feel the same.