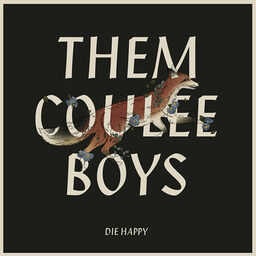 Them Coulee Boys are one of those bands who are difficult to slot into a neat little genre so on this occasion I'm not even going to try. I've seen them variously, and sometimes collectively, described as punk, folk, bluegrass, Americana, alt. country, even rock, and probably more that I can't even remember. They've even won awards as a 'bluegrass' band which surprises me; not the fact that they've won awards, they are truly a great band, but I've never really got the bluegrass comparisons. There is so much more to their music than that rather limiting word suggests and, to me at least, bluegrass is only a miniscule part of their makeup, and then mainly in terms of instrumentation
The band hails from Eau Claire, Wisconsin and 'Die Happy' is their third studio album, following on from the 2014 debut, 'I never lied about being in love,' in turn followed by the excellent 'Dancing in the dim light' in 2016 which received a 'rave' review on this website! The band lineup is Soren Staff on lead vocals, guitar and songwriting and possessor of a clear distinctive voice that perfectly evokes his incredibly descriptive writing. Beau Janke plays banjo, electric banjo, piano, harmonica and vocals, Jens Staff is on mandolin and vocals with Neil Krause playing bass, kick drum and vocals, the combination providing some of the best four part harmonies around, and ones that certainly wouldn't bother me if they were used even more!
Whilst the band are known for their highly energetic live performances this is an incredibly complex set of songs that seem to me to be personal to Soren Staff and prove again, if it needed to be proven, what a master songwriter he is, unafraid to open his heart to all. Not only does he write some thought provoking lyrics but the melodies and arrangements are just as exceptional on these songs that in many cases rise and fall in intensity as well as texture and tempo. The album opener Pray you don't get lonely gets things going with a deceptively mellow intro of gentle acoustic guitar that leads to Soren's   incredibly evocative vocal. Percussion comes in and eventually band harmonies on this seemingly sparse song that gets one and a half minutes in and then takes off. The metronomic bass, percussion, banjo and occasional piano with Staff's vocal raise the tempo and volume heightening the sense of drama before falling back again on this thematically complex song that can be looked upon as a love song or even a tale of the loneliness of depression or perhaps it echoes the complexities of a real life. There is a nice melodic chiming guitar with bass leading things along as Soren comes in with his lead vocal on Find your muse, assisted by band handclaps and eventually harmonies on a song that has a slow sparse start. The banjo and mandolin soon join in adding depth to the sound as the slow tempo is maintained. As things gradually solidify the power increases with percussion whilst still maintaining that tempo, at least for a while before taking off again giving the song a further lift and finally falling back. Mary's on the phone starts with a gentle banjo and bass with Soren's evocative voice telling a story about the complexities of love. The mandolin in the background is eventually joined by a shuffling snare sound, always with the banjo at the root of the song creating more of a rural feel particularly when the chiming mandolin joins in on the break with acoustic guitar. As the song speeds up and builds to a crescendo Soren's lead vocal comes back in with band harmonies
There is very little on this tremendous album that is 'simple' or easy to unravel, with the excellent lyrics and melodies put together with what, at least to me, seem to be incredibly complex, if rewarding, arrangements that ultimately make every song a mini cinematic epic. Those arrangements are never overblown and whilst the instrumentation is often sparse I would be surprised if we hear a more 'complete' album this year. It could even be the album that eventually defines the career of this tremendous band and will surely be reflected in the album sales of this excellent recording.