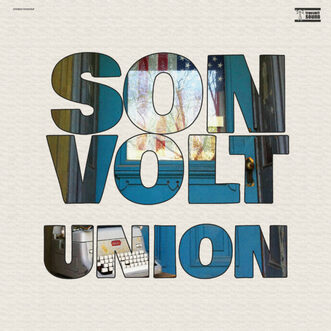 I've been a fan of Jay Farrar's music since first hearing Uncle Tupelo's classic debut 'No Depression' an almost impossible to believe near thirty years ago. Forward to the mid 1990s and there was the split with Jeff Tweedy that led to the formation of two bands who may well have started out in a stylistically similar manner but gradually drifted apart with Tweedy's 'Wilco' taking on much more experimental musical forms whilst Jay Farrar's 'Son Volt,' whilst not averse to experimentation, generally could be found in and around the 'alt. country' genre (or is it sub genre? I'm never sure).
Many will say Son Volt have never bettered their debut album 'Trace' and to be perfectly honest I'm one of them but that is not to say there haven't been some excellent recordings from Jay and the boys between those far off days of 1995 and now!
Jay sums up the politics and general state of the modern world, in particular the U.S,   as he, and many others, see it, with varying degrees of success. Most of the songs hit the listener with their obvious emphasis, others less so, which is as it should be. Anyone who sees a clear path to mass contentment in the modern world is either deluded or unsuccessfully trying to convince everyone how clever they are but with very little chance of success! It feels more of a summation of the way he, and many others, see the way things are, but with few answers; only politicians being fool hardy enough to publicly supply all of the answers to often impossible to answer questions. I thought that at times there was a little too much repetition of some of the phrases used although the aim was probably to add emphasis and drive home the point, an aim that was largely successful. Having said all that, this is not merely a 'political album,' and although it is heavily weighted in favour of a 'world view' it is not exclusively so and includes other subject matter as well as the 'usual' strong melodies, great lead and harmony vocals, tremendous arrangements and excellent playing, so can stand alone as a recording of great and often intense musicality.
There have been changes to the band lineup over the years although the current quintet is not lacking when compared to their first flush. It now consists of Jay Farrar on lead vocals, acoustic guitar and baritone acoustic guitar, Andrew DuPlantis, bass and backing vocals, Chris Frame played electric guitar, electric 12-string guitar and electric baritone guitar, Mark Patterson on drums and percussion with Mark Spencer on backing vocals, piano, organ, acoustic slide and lap steel guitar whilst the album was produced by Jay Farrar who also wrote the songs.
The tempo's are varied, giving the album a nice musical balance and whilst political the recording has more than enough variation to avoid the pitfalls of coming across simply as a monotonous 'protest album.' There is plenty of intensity; some of it quite heavy but there is also a little tenderness, at least musically, allowing the listener to enjoy the musicality as well as the 'messages.'
I certainly wouldn't describe 'Union' as Son Volts worst album, although none of their albums have ever been bad, neither is it their best. I can imagine Jay Farrar felt it was a musical and political statement that he felt he needed to make and was made generally, but not totally, successfully. Then again whatever anyone thinks about the political aspects it is a Son Volt recording with all of the musical quality that entails, such as great playing, some memorable melodies and Jay Farrar's alt. country defining vocals! Not their best, not their worst, but still an album that spends a lot of time in my home and car c.d players. If you don't take in the lyrics it is still a recording that contains a lot of originality and as I said, it's a Son Volt album!