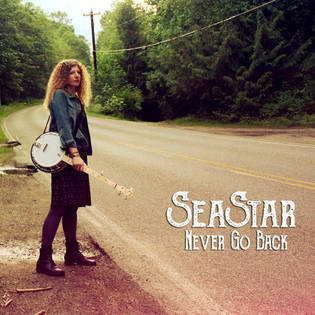 Celtic folk from an American band who live in Seattle, just about as far from the Celtic heartland as it is possible to get! If that is not enough, not only do they play their own interpretation of old Celtic music but they write most of their own songs in that style as naturally as if they were born and bred in Britain. We know that plenty of Britons play country music as naturally as if they are Americans so I suppose it should be no surprise when Americans reciprocate, but it still is, at least a little. As is the case with the best of the British artists who play country music, their own influences and backgrounds are brought to bear on their music that whilst rooted in folk also includes echoes of country, bluegrass and even 'old timey' music.
Of course, their case is not harmed by the fact that there is so much talent in this four piece band, particularly the stunningly beautiful vocals of Fae Wiedenhoeft, although picking Fae out is unfair on the three male members of the band who bring so much to the music. Fae not only takes most lead vocals but also plays guitar, mandolin, banjo and accordion, with Ron Allen on acoustic, electric and slide guitars, Michael Falcone, percussion, keyboards and vocals with 'Captain' Chambers (or Adam Shea Chambers as he is sometimes known!) on bass guitar. Fae has been quite a prolific 'folk' singer songwriter in her own right over the last ten years or so with around a dozen albums in her own name and this is her third with Sea Star. All of her recordings are available at the usual www outlets and whilst I've only heard a couple of them the quality and originality oozes from them. The three men are all multi talented and experienced musicians with varied musical backgrounds from production to playing a variety of musical forms picking up myriad influences that helped give Sea Star their shape and focus and their own originality within the broad Celtic/American folk 'traditions.'
Of the fourteen songs that clock in at just on an hour nine were written by Fae, one is traditional, one is credited to Francis Fahy and trad., one by Stan Rogers, one by Robert Burns and Melody Benbow and the evocative Along the Tay which was written by Michael Falcone who also provided the excellent lead vocal.
The album opens with a gentle mandolin and guitar intro on The great silkie with a little percussion and Fae's beautiful vocal on a simmering, moody traditional song that includes some nice evocative harmonies. Fae's Never go back is a haunting tale with banjo, throbbing bass, guitar and Fae's vocal with male harmonies on a just below mid tempo composition that has a strong country feel but of an indeterminate age! If it'd rain clocks in at seven and a half minutes and shows what can be done with a sparse instrumentation if the song and vocals are strong enough. The banjo introduces us to this epic tale with piano and occasional bass assisting Fae's gorgeous vocal which exhibits a depth of drama that makes further instrumentation superfluous, with the metronomic banjo throughout being quite mesmerizing. On Stan Rogers Giant the melodic electric guitar has a sound that helps create an almost medieval atmosphere with Fae's lead vocal echoing that evocation that is deepened by the addition of what sounds like a bodhran giving support to the bass. The final track on the album is an incredibly haunting song with the male harmonies, when added to Fae's lead, intensifying the powerful sense of drama whilst the throbbing bass and lovely dobro sound create a deep dark atmosphere.
This is not a band that is trying to copy British traditional music but a group of musicians who have a natural flair, love and feel for the music, whilst stirring in their own influences and modern ideas without having their vision blinkered. The album is steeped in old traditional music but conversely is also highly original and has a strong contemporary feel, making me want to further explore their work along with more of Fae's solo albums. The best of all possible worlds!