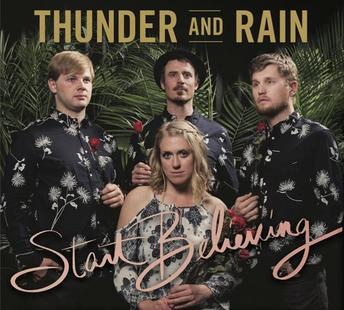 Thunder and rain is labeled on their website as an 'alternative country' band; nothing wrong with that but sooner or later we either need to define these terms or drop them. If like me, you lack the musical ability to aptly describe artist's sounds and musical nuances these definitions are pretty important in trying to give the reader some idea of what they might hear if they decide to take your word for it and spend some of their hard earned on an album. I don't remember when I first became aware of the 'alt. country' term but it was probably around the time of the late great 'Uncle Tupelo,' a band and a genre that to my ears Thunder and Rain have little in common with. I would have said they are a band that mixes country and bluegrass, in fact back in 2016 they were named #1 Bluegrass Band by a Denver based publication. Having said that, they apparently refer to themselves as 'Mountain made Colorado country,' a term that is probably the most accurate description yet. But, as I'm always saying, these generic terms, certainly to me, serve a useful purpose as a 'rough guide' in giving a partial description of an artist or album although it is important to try for at least a little accuracy. So there we have it; numerous descriptions, most of them accurate up to a point but the fact is there are no generic labels that accurately describe any band and of course there is always the point that most musicians of my acquaintance hate being labeled anyway! In applying any label it is also necessary to describe the instrumentation, artist qualities in terms of playing and singing as well as the quality of their writing and this talented band ticks all of the 'High' quality boxes.
To be honest it surprised me a little at first that I enjoyed this album so much, my tastes usually veering towards the edgier side of 'country' and its various offshoots in particular 'hillbilly' music, both old and new but nearly always kicking against 'mainstream country.' Whilst Thunder and Rain have much of the 'pleasantness' found in formulaic country music they bring their own unique and completely natural style to their songs and of huge importance to me at least, there is an 'edginess' in much of what they do that sets them apart and above much of what populates the country charts. Should they have the desire to do so I suspect they could quite easily 'cross over' into the mainstream world simply on the strength of their melodies and in all probability do very well. They are that sort of band;' one that straddles the border of country music and its offshoots that head to who knows where!
Whilst all members of this young four piece band are hugely talented, what really defines their sound is the beautiful folksy country vocals of Erinn Mae Peet-Lukes. The lineup is enhanced by several other credited musicians who are listed on the album cover but the 'core' band seems to be Peter Joseph Weber, mandolin, Erinn Peet Lukes on vocals, Ian Haegele plays double bass and backing vocals and Chris Herbst, dobro, lap steel and backing vocals. All songs were written by Erinn Peet Lukes and  RP Oates, who also played guitar, banjo and piano, although Erin got sole credit for Once I was and RP for Wrong or right, TN.
The first track on the album is Cut the wire, a beautiful, strong mid tempo song with Erinn's gorgeous vocal to the fore aided by some beautiful guitar sounds, an excellent fiddle break and a depth and power to their sound that lifts them above most of their peers. On the strength of the arrangements on this opener alone it is fairly obvious this is a band that has huge expertise in everything they do. Whilst the lyrics bring some drama they are able to express that drama without resorting to 'shock tactics' but by simply playing with a feeling that allows them to portray the depth and power. There is a bass and guitar intro on Once I was, with Erinn's beautifully evocative vocal on a slow moody drama with the fiddle adding depth and the song gradually lifting and taking on a heavier driving sound that builds slowly but impressively to a crescendo with piano adding to the instrumentation. The power slowly increases and the bass and percussion build the intensity with excellent guitar, fiddle and piano breaks and then the song gradually slows down before building again to a final crescendo. On The reckoning there is a lovely dobro sound and a restrained fiddle in the background with excellent chunky bass and percussion on a slow yet moodily reflective ballad that is mellow yet at the same time has a built in sense of drama. I think that is what sets this band apart; the fact that nothing is done to specifically sanitize the sound, as a consequence of which that sense of drama is enhanced and even 'mellow' songs have a strength that is rarely if ever found in the mainstream. Whilst 'smoothness' is not a crime, it is also unnecessary as is 'over production' and this band virtually defines the ability to make gorgeous sounds whilst still having something for everyone including old hacks who may sometimes have a slightly cynical attitude to what they normally don't like!
Some will say, as a couple of people have already said to me, this is not a reinvention of the wheel but if you have a liking for excellent songs, great arrangements and playing and gorgeous, evocative vocals there are plenty of bands around that fit the bill but few if any that can match Thunder and Rain. Where many achieve a pleasant yet easily forgotten sound this talented band are not easily forgotten and I can't imagine that fans of country music with a bit of an 'edge' would ever want to!