THE BUMPER JACKSONS - TOO BIG WORLD
​ 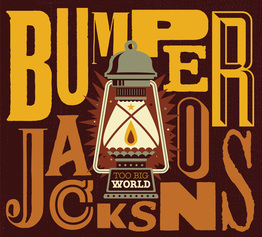 I have seen so many descriptions of the various generic blends tied up in the music of the Bumper Jacksons that it makes my head spin trying to remember them all. There is jazz, old timey, early blues, country, soul, gospel, even hillbilly, various jazz off shoots and others that I've no doubt forgotten. What makes a definitive description difficult is the fact that they are all correct, although many of their songs incorporate various aspects of several or more of the aforementioned. So that clears that up! Things are further complicated by the fact that they mix up a few of their own songs with oldies from various genres. Not only do they blend qualitatively, thanks to the sheer dynamism of the playing and in particular the vocals, the album flows more than would normally be expected from a recording so varied and containing so many generic offshoots.
Probably the nearest comparison that can be made would be the Squirrel Nut Zippers but even that esteemed band didn't explore as many generic strands as the Bumper Jacksons. This six piece band consists of founder members Jess Eliot Myhre, vocals, clarinet and washboard and Chris Ousley, guitar and vocals, Jess coming from a vintage jazz background and Chris steeped in old time banjo and bluegrass. The newer editions are Alex
Lacquement on upright bass, Dave Hadley, pedal steel guitar, Brian Priebe, trombone and Dan Cohan on suitcase percussion.
The album contains sixteen songs and clocks in at just on an hour so you get the best of both worlds, both quality and quantity. If ever a band could be truly said to be ploughing their own musical furrow it is this one. They make no allowances for how a song was originally recorded; they simply put their own individual stamp on it and they seem to have a natural raw edge in everything they do, with their drive and commitment allowing every listener to know this band are not just going through the motions but are at the forefront of a brand of music that really should catch on, given a chance.
Satan, Your Kingdom is a jazzy version of the classic song with brass, thumping bass and percussion, alongside the band harmonies and slightly distorted electric guitar that add to the quirkiness.  I haven't heard every recorded version of the song but I suspect no one has ever given it this treatment. Delta Bound is a song that is rooted in the blues but nothing is ever quite that straightforward with the Bumper Jacksons. The instrumentation is quite sparse with steel guitar, bass and percussion joined by clarinet and Jess's atmospheric vocal enhancing the bluesy feel that includes a mix of swing and jazziness. I've Got My Whiskey is a real swinger with Chris on lead vocal aided by a shuffling percussion, melodic steel guitar and excellent harmonies on a composition that could easily have been recorded in the 1950s as an upbeat honky tonk song that also includes an excellent melodic twangy electric guitar. Red Silk Stockings starts with a beautiful steel guitar and clarinet with Chris on vocal, on a song that is not too far removed from western swing, despite originally sitting squarely under the 'country and western' umbrella. The trombone is also added to the eclectic mix. On Jubilee there is an eerie fiddle sound blended with a melodic guitar and Chris on lead vocal with Jess harmonizing on most of the lyrics. A thudding bass propels a song that is reminiscent of the old hillbillies with its high lonesome atmosphere on an old Hoagy Carmichael original. Trouble in mind is another old blues song, this one having been recorded by numerous others during the decades since its inception. Jess's voice is weighted more towards a jazziness and the trombone and steel guitar add to the mix. There is a slow moody start but eventually the song picks up pace with drums and heavy bass before slowing again on a tremendous version of another classic.
By any standards this is an excellent album and one that genuinely pushes the 'roots' music boundaries ever wider. Should you ever need to find a definition for 'eclectic' look no further. To my mind there is no finer definition than the Bumper Jacksons music!