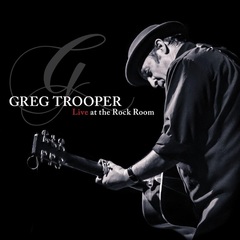 It feels like I've been a fan of Greg Trooper forever and yet in actual fact it happened by pure chance when someone passed me a pirated cassette of his debut album, 'We won't dance' back in the early 1990s. I didn't actually rave over it but was intrigued by the fact that the songs and performance had an 'honest' feel rather than blending with the often over produced dross that was so prevalent back in those musical 'dark ages.' Here was a man who seemed blind to music fashion and was determined to plough his own highly individual musical furrow.
All these years later nothing has really changed stylistically although with experience his songwriting, which was excellent from the off, has steadily improved making him one of the most riveting writers around. His vocals have always had an appealing warmth and clarity that enables the listener to concentrate on his lyrics and the melody rather than trying to decipher any overt rawness or over the top affectations. The highly individual field in which he works is one that contains a variety of generic offshoots from folk, country, even a little bluesiness, plenty of soul and a variety of other strands that are difficult to unravel. The stories depicted in each of his songs are the dominant factors on all of his albums, with the quality of his vocals being the clincher that enables the listener to be drawn into the lyrical pictures that this talented songwriter paints.
A few months ago Greg was diagnosed with cancer and although the prognosis seems to be good he has had to have chemo and radio therapy and cancel playing live. Pleasingly, at time of writing, he has started some live work again, hopefully an indicator that things are improving as well as being a treat for his many fans. I would imagine that anyone hearing this tremendous concert recording, as well as any of his studio albums, is going to want to see this extraordinarily gifted singer songwriter play live. The album contains fourteen songs, all written by Greg, from various stages of his career and was recorded in the 'Rock Room,' Austin Texas with just Jack Saunders on upright bass and backing vocals and Chip Dolan on keyboards, accordion and backing vocals. It is lovely to hear a master musician playing and singing his songs in such a sparse setting, with the bass laying a solid but relaxed foundation and the often used accordion enhancing the emotion and the beauty of the music.
Greg's songs often take the listener on an emotional roller coaster thanks to his powers of observation relating to the human condition. He has the ability to get to the root of a situation and sum it up with just a few words, and as in the case of this concert, takes the audience from a comfortable cozy place to somewhere they don't want to be and back again. Thanks to his writing ability and the warmth of his vocals you know many of those songs are taken from observations rather than his own life, somehow easing some of that discomfort and whilst he is not a writer of particularly humorous songs there is humor in his live performances as evidenced on this beautifully recorded disc. It is not just the warmth of his vocals that has such great appeal but you have to build into the equation, as you should with all singer songwriters, the ability to depict each situation and the degree of emotion required to get the best out of each song. Greg was a master of this right from the off, leaving many more famous singer songwriters gasping for air as they were and still are left in his emotional wake, and yet despite the warmth he is just as able to inject a raw element where he deems it necessary.
I rarely review live albums, always feeling that if a performer has even a slight off day it can put people off their music, added to the fact that in many cases their ability to play live is no match for their studio recordings. This tremendous live album forces a rethink thanks to the peerless quality of the playing, Greg's vocals that qualitatively are the equal of his studio recordings and the tremendous and all enveloping warmth of the atmosphere he is able to create with his lyrical pictures. If you buy just one live album, make it this one, you will not find better, then treat yourself to an exploration of his peerless back catalogue.