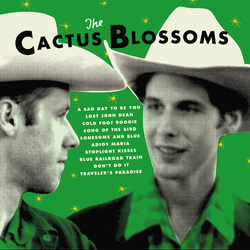 The various branches and offshoots of the country music tree tend to blend into each other, making the definition of any particular strand difficult, but this album, for me at least, defines how I imagine real authentic ‘Country and Western’ should sound. It was, for several
decades in the mid twentieth century, the most popular branch of country music, indeed being what many people assumed to be the only form of country music! Gradually it became more formulaic and smoothed out to such a degree that much of it was little more worthy than ‘elevator music.’ Even then, in the early days of Nashville as a music centre, there were still highly talented artists that played the music they had grown up with, adding no frills other than basic instrumentation and the human voice or in the case of some extraordinary brother
acts, voices! Fortunately, The Cactus Blossoms slot firmly into the latter
category, with some of the best players in country music for support and vocals and harmonies worthy of some of the greats of the past. Certainly there is a sheen to this album but it is a sound that still manages to retain an edginess that most of the chart acts lack.
The band is made up of brothers Jack Torrey and Page Burkum who both play guitar and take lead and harmony vocals, with the former having written six of the tremendous songs on this album whilst the
latter wrote two. There is also an excellent version of Alton Delmores Blue Railroad Train as well as the traditional Lost John Dean. The
band sound is rounded out by musicians of the calibre of Mike Russell (Mark Olson, Creekdippers, Joe Henry) on fiddle, Randy Broughten (Gear Daddies, Trailer Trash) on steel guitar and Liz Draper on bass. Whilst it is fairly obvious artists such as the Everly and Delmore brothers have been an influence on them they actually do have their own modern style within the genre making this album an incredibly fresh as well as rewarding listening experience.
Most of the songs have a ‘high lonesome’ feel to them, consisting of several lost love ballads and I’ve never heard a tale of the killing of a songbird done in quite such a heartrendingly evocative way as the simply gorgeous Song of the Bird, driven along by the exquisite sound of a dobro. The traditional Lost John Dean gets a lively mid tempo
treatment, almost having a western swing feel and they are very far from being shamed when compared to the original on the Delmores Blue
Railroad Train. There is the gorgeously haunting steel guitar on the harmony rich tale of young love, Stoplight Kisses, preceded by the excellent dobro and fiddle propelled sad haunting ballad Adios Maria. All eight of the songs written by these two talented brothers are excellent, helped by the fact that they were writing for themselves, so they know their own strengths and weaknesses, although of the latter there is no evidence whatsoever!
In many ways this is a musical genre that can probably be termed as mid period country music, rather than traditional, old time or ‘Hillbilly’ but this tremendous band really are a reminder of how good brother harmonies can be and that they most certainly have a place in modern day music when performed as well as  this. After the first couple of listens I thought the strength of this album was in those incredible lead and harmony vocals, but as you get to know the songs, the writing is equally strong, as is the instrumentation and the playing by these superb musicians, making this a virtually peerless album within the genre.