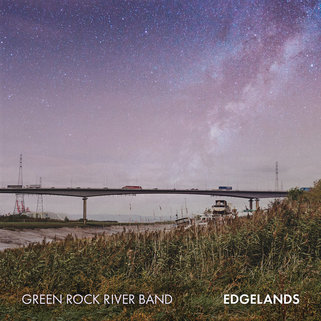 Somebody described this talented London based band to me as a blend of folk and country and after quite a few listens I would say they are certainly a highly skilled folk band and one that to a lesser degree has recognizable country elements in their makeup, not just in terms of some of the instrumentation, but in a stylistically off beat manner that they seem to have arrived at naturally rather than attempting to emulate any particular artist or style.
It will be obvious to anyone hearing this eight song recording that the talented collective have incredibly wide ranging influences and are certainly not tied to one or two styles, even allowing themselves at times to edge towards a little jazziness on several songs although their lack of stylistic inhibitions is refreshing. Having said that; to my ears at least the dominant element is 'folk' although you could never refer to this recording as a 'folk album.'
Four of the five band members who worked on their 2012 debut e.p are still with the band and the eight piece lineup who recorded 2014s excellent debut album 'Rhinoceros' are the same eight who recorded this tremendous album. That must go some way towards explaining how they are such a tight knit outfit in the studio because with the few recordings available they must have played a lot of live gigs, with that togetherness being there on this album for all to hear. The original four are Jeremy Sachs on lead vocals and banjo, Matt Markwick, backing vocals and fiddle, Paul Freeman, vocals and guitar with Mark Duddy on Drums. Added to those are the four 'newest' members, Adam Bowden Smith, who plays   bass, Rich Stillman on washboard, Rebecca Freeman, vocals and Sarah Mann on trombone although on this album Emily Lim played trumpet on Hard times. The eight songs on this recording were co-written by Jeremy Sachs and Paul Freeman and the album was recorded and mixed by Simon Todkill at Miloco Studios, North London and produced by Sarah Mann.
The album kicks off with Hard times, with a gentle acoustic guitar intro leading to a strong, confident vocal style that carries every emotion easily, able to veer from gentle folksiness to a deep dark rawness. Eventually the throbbing bass and restrained percussion are welcomed into the mix along with a lovely haunting violin on a song that stays well below mid tempo but certainly lacks nothing in dramatic impact particularly towards the end when the brass takes off, creating a nice melodic crescendo before signing off with the vocals. Percussion, brass, banjo and fiddle get Blackbird underway with a really strong melody before the vocals come in on another 'catchy' song with strong lead vocals. It is a song that has a strong English folksy feel and a dynamic atmosphere, both elements that are contained in varying degrees on most of the eight songs on this, the bands second album. Kevin, King of the Edgelands is a song that does have a little dark 'gothic country' flavour in its makeup. The metronomic percussion, trombone and repetitive fiddle support the raw vocal that is the driving force of an excellent story song. The lyrical location is indeterminate which simply adds to the depth and eeriness of the song although at times, and for absolutely no reason that I can come up with, it conjured up the English swamplands, thus rooting the song in a strange otherworldly folksiness!  There is a beautiful, atmospheric lead vocal from Rebecca Freeman on There's a sadness, supported by fiddle, bass and percussion. Eventually the trombone joins in with the banjo giving a lift to the song that whilst unnecessary was still very welcome in enhancing the atmosphere and adding a little more colour.
This beautifully conceived, written and performed recording proves yet again that the 'roots' music scene in the U.K is not only alive but thriving thanks to bands such as the Green Rock River Band. They bring not only great skill but also a large slice of individuality as well as originality to their music; not much more the discerning music fan could wish for really is there!