SON OF THE VELVET RAT - DORADO
​ 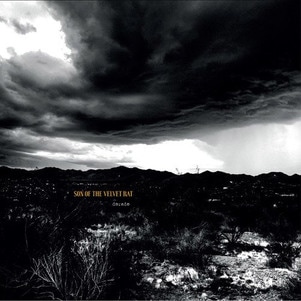 Son of the Velvet Rat is an intriguing 'American roots' music setup, consisting of Austrian singer songwriter Georg Altziebler and with his wife Heike Binder who plays organ and accordion. They left their Austrian homeland after releasing five albums and took up residence in the west coast of the U.S in Joshua Tree, a desert location that has always been an inspiration to them, something that will be apparent to listeners as they lay back and let the music flow over them.
There is a spaciness on this recording that evokes the broad, arid desert environs whilst still containing a deep, often dark, atmosphere and an occasionally slightly unsettling air of mystery. That air of mystery and strangeness applies to just about every song on this quite addictive album. On first listen I was waiting for it to suddenly take off but they are not that kind of duo and the songs are so beautifully written, big tempo changes would be of no benefit to any of them.
There is very little that even gets within shouting distance of mid tempo and yet there are plenty of variations on this highly unusual 'roots' album that is likely to be marketed under the 'Americana' banner. There are subtle little tempo variations, equally as subtle changes in instrumentation and on most songs the restrained female harmonies add depth and variation. It is one of those recordings on which subtlety is key, but would only really work if everything else comes together, particularly the songwriting, a discipline of which Georg is a master. Of course the arrangements are important and if an over fussy producer had been used the successful outcome would have been limited but Joe Henry has allowed and helped them to capture the sparse, arid desert atmosphere in which any living creature with any sense at all moves with a slowness that is in tune with their environment, something this album achieves beautifully. As the producer and talented singer songwriter in his own right I suspect Joe has allowed the songs to flow as the duo intended and would have been vital to the project with his understanding of the requirements of a singer songwriter. Whilst everything about the album smacks of quality it is the ' atmosphere' they have created that is actually the overriding factor.
The arrangements are beautifully sympathetic to the songs and the whole feel of the album and the playing on this sparse recording is always excellent. Georg's raw breathy, at times almost 'talk' vocals are perfect for this situation, adding further depth to the ten highly literate self penned songs  as they slowly meander their way through the album. The album opener Carry on has a very slow, dirge like start, leading into Georg's raw rasping lead vocal, supported by a little shuffling percussion and thudding drum with a very slow build that never actually speeds up as the sound gradually fills out with lovely fiddle and female harmonies  on an excellent song. That is followed by Copper Hill which has a slightly faster start with organ, percussion and harmonica giving support to Georg's vocal but with instrumental changes, including brass, adding just enough colour to highlight the slight variations included on a song that all round has a fuller sound than its predecessor. Again there are some gentle female harmonies on another beautifully written song that has a quite appealing chorus. Love's the Devil's foe has a nice organ sound that blends beautifully with the melodic guitar and bass and shuffling percussion on a song on which Georg at times uses an almost 'talk vocal' style, again with the female harmonies for support. As with the songs predecessors the instrumentation is both sparse and deep but perfect for the song, so that the listener will slowly become aware of little changes in the instrumentation as the song progresses, nothing invasive, just slight changes of texture that applies to most songs on this unusual recording. Thudding percussion and spectacular effects are used on Surfer Girl a song that is actually approaching mid tempo but this is not a classic 'surfer song.' There is a lovely chiming guitar and a variety of percussive and organ textures that make this composition different to what has gone before; not exactly upbeat but less downbeat! Final mention is of Sweet Angela a song that contains another lovely acoustic guitar and harmonica start with a restrained percussion on another slow moody tale that actually conjures up the feeling of an arid desert atmosphere.
Really, this is an album that conceptually works beautifully, not in terms of songs that lead into each other lyrically and form a continuous story, but in terms of atmosphere and everything that has gone into creating it. It is like nothing else in your collection and is more than worthy of parting with some of your hard earned for!