GWENIFER RAYMOND -
YOU WERE NEVER MUCH OF A DANCER 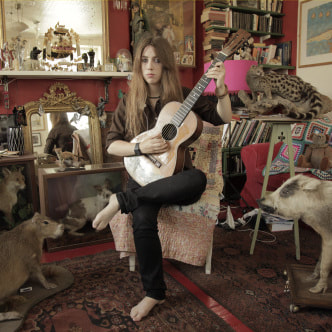 Having absolutely no musical talent whatsoever I find reviewing an instrumental album incredibly challenging. On the other hand that total lack of instrumental dexterity does allow me to sit back and listen to the melodies and the variety as much as the playing. Obviously the quality of the playing is absolutely vital but it's probably safe to assume that anyone who has the nerve to subject themselves to the recording process whilst just playing an instrument must know they have the 'chops' to carry it out. I can't actually remember the last time I did actually write a review of an instrumental recording but during the very first listen to this extraordinary album I just had to do it!
Gwenifer Raymond is a young Welsh multi instrumentalist who is now Brighton based and whose website describes her music as 'moody American primitive,' for once a term that as I understand it, can be said to be accurate. The late John Fahey was the first artist to develop the style that was based on the blues but expanded to allow for the lack of vocals (not to be confused with 'new age' as developed by Windham Hill Records artists and described by Fahey as 'hot tub music') and I'm pretty sure that Gwenifer would have studied him along with a few other artists and absorbed their styles and teachings. Having done that she has gone on to develop these sublime qualities that have beautifully blended everything she has learnt into a unique and highly 'literate' style of her own.
The only time I have seen her perform live was back in mid winter when she supported the great Charlie Parr, an event at which I, along with the rest of the assemblage, was absolutely knocked out by her incredible dexterity on both guitar and banjo and can't wait to see her again at this year's Maverick festival.
Of the thirteen tracks on this album all but one were written by Gwenifer, an incredible feat, because stylistically they all have an 'old timey' feel, as if this was the music that Fahey, Basho and latterly Rose and Bachman had been influenced by. That may be going a little far (but not too much) but her compositions are the equal of her playing skills, something that really should give any artist an edge in this highly competitive business. Many instrumental albums, at least to my ears, can sound boring but this one never even approaches that state thanks to not only the incredible playing but also the varied tempo's and strangely, themes, as well as the varied change of instruments from acoustic guitar to banjo to dobro, all played with great skill and dexterity.
The album opens with the one minute long lovely haunting, deeply mournful fiddle tune Off to see the hangman, pt. 1 and then it's straight into Sometimes there's blood, a speedy excercise in how to play guitar at a level very few are able to attain. Gwenifer shows incredible dexterity on a tune of her own that has a lovely melody, with her own thumb plucked percussive backing! Off to see the hangman, pt. 2 is another excellent guitar composition, this one quite slow and moody as well as gorgeous. It has a lovely upbeat melody but with a deep sense of drama that lets the listener know things could change quickly on an incredibly lyrical instrumental that is full of colour and texture. Oh command me lord is a tremendous banjo instrumental, this one played at breakneck speed, at least to my ears. Listening to both banjo and guitar tunes on this album it is virtually impossible to tell which is Gwenifers first instrument! On the strength of this track I would say banjo but on the guitar tracks it is guitar! Sack 'em up, pts. 1 & 2 is another guitar instrumental of great beauty played at a low, moody tempo on a tune that is probably best described as a reflective ballad. After about two minutes things perk up a little as if the balladeer suddenly snapped out of her reverie and took on a note of optimism before slipping back again  towards the end of the song. The final track on the album, It was all sackcloth and ashes is a lovely dobro played tune, this one very slow moving and having an arid desert feel that would have fitted well into the soundtrack of 'Paris, Texas.' For that matter it could just as easily fit any other desert based cinematic experience such is the depth and quality of the concept and the playing of this slow but beautifully 'coloured' composition
It's always difficult to know how an instrumental artist will fare in the commercial music world but I'm assuming those at the very top are at least able to earn enough to be able to survive and continue their quest for excellence. Whilst I may be no expert I can at least recognize the best from the rest. Gwenifer Raymond is most definitely a member of the former. Roll on the Maverick festival when we can all savour the delights of her dexterity again and I can imagine this tremendous album will very soon sell out at the 'Company store!'