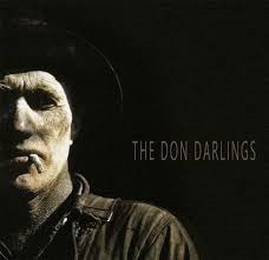 Most people who write reviews, whether the subject matter is music, books, food, or anything else you can think of, are looking for something not only of quality but also, and maybe more importantly, with a little originality, or at the very least different to what everyone else is doing! It is not something that happens with any great frequency but when it comes to making music The Don Darlings easily qualify on both counts. They are not so outrageously different that any of their music seems contrived (as some do) but they have a quite original take on twangy ‘country’ music, perhaps conveniently summed up as ‘Nick Cave  goes country!’  That is certainly an over simplification but is made mainly because the lead vocals are not only very deep but also incredibly ‘dark’ and atmospheric, as is much of the band sound, but that should at least give potential listeners a vague impression of what they will hear, although nothing really prepares you for what follows!

This new recording follows an e.p that was released in 2012 and their debut album ‘The shortest straw’ which was released in 2010. They play a large number of live gigs and are reputed to be a brilliant live band. (British promoters take note!). Home to the band is Gothenburg, Sweden, an area of Europe that seems to be producing a number of slightly different ‘American roots’ bands who frequently fit into various sub genres within that all encompassing heading! Whilst the band is mainly Swedish the lead singer, Damon "The Reverend" Collum hails from Dallas, Texas. The remainder of this excellent band consists of Johan Conse on drums, Martin Olsson plays guitar, as does Tony Martinsson and Mika Häkki is on double bass.

There is an intense air of dark drama that pervades every song on this excellent album and yet it is never depressing to listen to. That is thanks to the fact that most of the songs contain an excellent hook and often strong, memorable melodies, all helping to balance that deep darkness. All of the songs are written by the Don Darlings with the exception of Noose Around My Neck, which was penned by D. Collum and M. Husvil and Transcendental Noise by M. Husvik. Most of those songs are somewhere around slow to mid tempo, which perfectly suits the atmosphere and the lyrics

Album opener Resurrection is a song that starts slowly and then gradually builds an atmosphere of intense drama that is added to by the chugging violins and the deep dramtic vocal on a song of dark drama that provides the subjects with few answers and no real redemption. Provide Me An Angel opens with a twanging guitar and drum intro that has a ‘spaghetti western’ feel on a mid tempo song, again with their signature deep dark sound on an excellent ‘western’ story song that draws the listener into this darkly cinematic world. It is interspersed with a lovely violin solo and chiming melodic guitars. A quite spectacular song! Noose Around My Neck, as you may have worked out for yourself, is not a comedy song! It is a slow, otherworldly, eerie tale with spooky violin and funereal drum beat, with deep twangy guitar and dark deep intense vocals that are joined intermittently by banjo. A song that again has a cinematic quality but even without the lyrics it would have to be a film in which the subjects find no redemption whatsoever, in some ways a dark unearthly satanic scene from a painting by one of the old masters! Moonshine Baby includes clanging as well as twangy guitars that at times have a sinister otherworldly feel propelling the vocals along at a nice mid tempo allowing those vocals the space to express the story of the ups and downs of a love built around moonshine! The always excellent blend of guitars provides a slightly threatening, powerfully intense atmosphere. The album concludes with it’s tenth excellent song, Let The River Run, a slow moodily haunting tale with dense instrumentation further deepening the pervading darkness although the beautiful steel guitar lifts the emotions as if showing a little hope through the gloom.

This tremendous album provides proof if it is still needed that you don’t necessarily have to be born and bred in the U.S to successfully make high quality deep dark country music. Why should you need to be, when most of the generic strands from which ‘country’ music sprang originated in Europe anyway. As with an ever increasing number of European bands The Don Darlings can be added to the upper echelons of that music and fairly close to the absolute zenith!