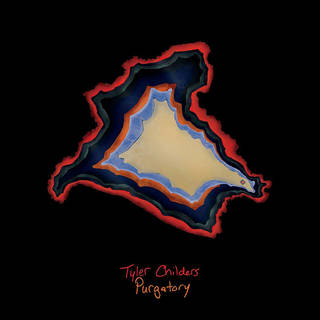 I read somewhere that 'Purgatory' is Tyler Childers debut album but was delighted to find that it actually isn't. In 2011 he released 'Bottles and Bibles' a completely stripped down recording on which there was little more than just Tylers excellent vocal, acoustic guitar and the occasional fiddle. On it he performed thirteen beautifully written songs, although by the end of the first track it was obvious that here was a rare new talent full of ideas and promise. Six years we've had to wait for its successor and was the wait worth it? The answer is a resounding yes, worth every minute of those six long years. In 'Purgatory' he has produced the best sophomore album that I can think of. Is it better that his debut? Again yes, his songwriting has matured, as has his voice that whilst having had a character laden raw edge back then has taken on even more character, depth and texture with those passing years.
This album has a much fuller sound than that debut, with some fine musicians bringing quality playing to these ten excellent arrangements, as you might expect from co-producers of the quality of Grammy winners, Sturgill Simpson and David Ferguson. Tyler himself is no slouch on guitar either and he was helped out here by multi-instrumentalists Stuart Duncan, Michael J. Henderson and Russ Pahl, Michael Bub played bass and Miles Miller, the man who introduced Tyler to Sturgill, was on drums,.
At the time of the first album Tyler was only just out of his teens and in listening to the lyrics of these latest self penned story songs it becomes obvious that this 26 year old has done a hell of a lot of living in those six years, going from off the rails youth to the responsibilities of married life. Apparently all of the songs are at least semi autobiographical in which case he has experienced some powerful dramas, intense sadness, intense joy and just about everything in between, put together as a personal tribute to life in his home town in Lexington County, Kentucky. The 'modern sound of the mountains' is one appropriate description I've seen that perfectly describes this album that will no doubt be promoted as 'country music.' It contains most of the elements that make up that incredibly loose genre, including old timey, rock 'n' roll, country rock, Americana and alt. country, all played out with a completely natural 'high lonesome' feel. On reflection this could very well be the album that ties all of the various elements that are not 'country pop' together and goes a long way towards defining 'real country music;' no sanitization, songs from a life that includes warts and all, edgy vocals and a fearlessness of the consequences of making an album that the artist needed to make rather than just a collection of songs. In many ways it is a shame the album is being released so early in the year; the music business being renowned for forgetfulness and this being an album that could very well be a contender for album of the year 2018.
The listener can be forgiven for thinking album opener I swear (to God) is going to be a 'western swing' song thanks to the sound of the fiddle that gets things going but it is then joined by percussion and a deep powerful walking bass line with some warm sympathetic harmonies on an excellent song on which Tyler sounds a little like a young John Prine. It's a song that has an upbeat feel despite the drama in the lyrics, all topped off by the lovely weeping steel guitar that in some ways contrasts with the 'rural' country feel of the song, but suits it perfectly. The fiddle and twangy guitar introduce us to Born again, an easy rolling tale that as with its predecessors has a spacy sound that holds echoes of the 'high lonesome' sound of old. There are some excellent harmonies and the beautiful steel guitar with another throbbing walking bass line on a song that is not instrumentally 'busy' but always seems to have something of interest going on, in fact much of it is quite riveting on this tale  on which Tylers vocal performance is as usual excellent. On Whitehouse Road the guitar, steel, bass and percussion provide a quite eerie sound on this excellent composition. It again has a 'rural' feel, certainly in the lyrics of this powerful tale of excess and includes regular interventions from Jews harp and banjo amongst the twang and the metronomic bass line.
The banjo and fiddle get the album's title track Purgatory started as if performing at a hoedown of old, eventually joined by steel guitar, Tylers 'mountain' textured vocal and some excellent, sympathetic harmonies on a mid tempo 'foot tapper!' The arrangement is excellent and the playing is virtuosic! A dramatic twangy guitar, thudding percussion and bass lead into Tylers haunting vocal and the atmospheric harmonies on Honky tonk flame. Because of the treatment of, possibly the fiddle or guitar, the song has an otherworldly eeriness that includes an unusual modernity whilst also feeling completely out of any particular time. It is a lyrically dramatic tale with an arrangement that fits perfectly as it eventually descends into a controlled cacophony.
I can say with absolute honesty that the above mentioned songs were picked randomly. The quality of these ten tales is such that it is impossible to pick favourites or those of a higher quality. Every one of the ten has a deep emotional content as do Tylers excellent, hugely evocative vocals; the arrangements and playing just couldn't be bettered and Tyler, even after just two albums, albeit six years apart, has to be one of the best singer songwriters around. At this ridiculously early stage of the year only a lunatic would even intimate a contender for album of the year, but I've been called much worse so ...........!

Tyler will be setting out on a European tour later this month and will be playing several unmissable gigs in the UK, in particular one at the Komedia Studio, Brighton. See you there!