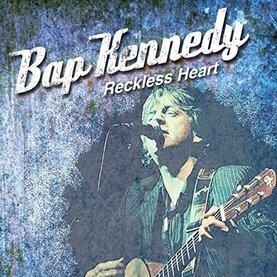 I received my review copy of this album just a couple of days before getting the sad news that Bap had passed away after a brave battle against the scourge that is cancer. At first I didn't feel like writing a review; as many will know a brave but ultimately losing battle with that scourge is a little too close to home for comfort for me, but then I thought how hard Bap and many other people have worked to get this recording out and it seemed disrespectful not to acknowledge this great singer songwriters work. I briefly met Bap many years ago and was struck by his warmth and amiability and of course his enormous pot of talent that he explored to bring us roots music of great variety and quality. One of, if not his greatest, musical influences was the late great Hank Williams; Bap having recorded a tremendous tribute that included all Hank penned songs earlier in his solo career. Whilst Bap was very much an 'original' and had his own completely individual style that influence was often apparent in the tremendous albums he has made through the years since that 1999 release 'Hillbilly Shakespeare.' Prior to starting his solo career, the Belfast born musician had been the lead singer and songwriter with the tremendous London based roots band, Energy Orchard, a band who were more successful playing live than they were in the studio. However, all seven of Bap's solo studio albums that I have are more than worthy of seeking out but be warned, if you get them it will be sometime before you will want to play much else, such is the quality!
All of Bap's albums are different yet easily recognisable as his, with his distinctive warm and evocative vocal projections signalling his individuality and the songs perhaps indicative in some ways of how his world was shaping at the time. It is only in relatively recent times that, thanks largely to his wife Brenda, Bap was diagnosed with Aspergers Syndrome a disability that makes normal life difficult but the problems it must create for a working musician are difficult to comprehend.
The album starts with Nothing can stand in the way of love, a song that has a nice easy going guitar sound driving the song along at an easy going mid tempo with Bap's warm, expressive vocal controlling a composition about the power of love. A twangy electric guitar sound is soon added with a piano and gentle harmony for company and finally a gorgeous accordion tops things off. Bap had the ability to bring in instruments to add just the right amount of colour and texture to a song and this excellent tale epitomises that ability.  It is immediately followed by a lovely rolling piano sound on Good as gold, a gentle ballad that has the sublime melodic qualities of a typical late 1950s to early 60s 'hit record.' The lovely gentle female harmonies are one highlight on an absolute beauty of a song, with the gentle keyboards, a lovely melodic guitar sound and the bass gently throbbing away in the background. Henry Antrim is a quite epic song that has the feel, with its strummed acoustic guitar, of an old 'country and western' song. The lovely sparse, melodic electric guitar sound, with restrained keyboards, gives the song an epic quality whilst Bap's vocal is at its almost winsome best on a cinematic story of misdeeds and regret. A funky piano and electric guitar get the title track Reckless heart going aided by bass and percussion and Bap's evocative vocal. Part of the man's great talent was the ability to inhabit a song and a style regardless of any genre that 'old hacks' chose to try and fit him in! He was very much a man driven by his own musical vision rather than someone who tried to toe any generic line. Final mention goes to Honky tonk baby an easy rolling 'honky tonk' song as the title suggests, with rolling piano, excellent percussion, driving bass and Baps excellent vocal proving that had he wanted to be he could have been a very successful 'country singer/songwriter,' a genre from which his roots sprang, although he was never going to be restricted by the narrow confines of any particular style.
As I've already said all of Baps albums are more than worthy of your investigation but as a final effort and when the sadness has lost a little of its edge we could be looking back at Reckless Heart as a career high.