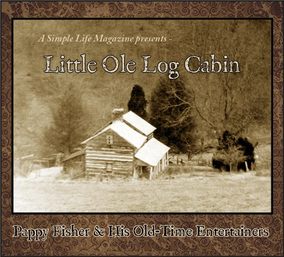 Home for Pappy Fisher and his Oldtime Entertainers is in the Appalachian area of Knoxville, Tennessee, one of the locations from which recorded string band music sprung, so a lack of authority and indeed authenticity could well be a huge problem. Authenticity is a strange, slightly discomfiting, word to use when trying to describe a musical style that is directly linked to that produced many decades ago; perhaps 'evocative' would be better, although I always tend towards the dictionary meaning of 'authentic' that says 'of undisputed origin.' The fact is that this recording is not merely evocative; it actually is, in everything but the recording date, that old music! That is just my convoluted way of saying that often in reviews I write, because much of the music is rooted in that of many decades ago, the 'authenticity' word is used to try to strengthen the impression of evocation that I get, feeling that a particular recording really catches that 1920s 'hillbilly' atmosphere in most ways. The fact is that Pappy Fisher and crew are not just authentic or evocative of those times; it's my belief that they were a string band in the 1920s and actually managed to invent the time machine, then used it to leap forward into this twenty first century! There are many great string bands around right now who are so good that it's difficult to differentiate between them and the originals, but very few that I can think of capture everything about those times and the music as much as this incredible band do on this their debut album.
Many, or at least most who read this, will say much of the above is just pointless gibberish, but the fact is I'm looking for ways to emphasise my point about how 'authentic' and evocative this band is. I'm not sure what equipment was used to record this extraordinary album but I suspect it was not 'state of the art,' possibly analogue and trying, incredibly successfully, to recapture their live sound. If ever an album was made by people who knew each other intimately and loved playing together, blending all of their skills into a uniform sound that has that same rough and ready edginess of the originals, it has to be this band! They are a four piece of Drew Fisher on vocals and banjo, Jesse Tindell, vocals and fiddle, April Hamilton is on backing vocals and washtub bass, with Buck Hoffman playing guitar. Their skills on their instruments are tremendous, the recorded sound slightly ragged (or authentic!), the vocals equally ragged giving an authentic evocation of the string bands of nearly a hundred years ago who, whilst gifted musicians, put atmosphere and entertainment value above all else. A band that didn't create an entertaining atmosphere wouldn't have lasted long. This band would have had great longevity as well as being in the upper echelons of 'hillbilly' music of ninety years ago and we would no doubt be marvelling at those crackly old recordings!
Whilst this is their debut album, both Pappy (Drew) and April, partners in life as well as music, are members of another extraordinary band, The Knox County Jug Stompers, who have a highly recommended (certainly by me!) album to their name! They seem to all be members of a broad musical community in that geographical area, no doubt something that has existed for many decades, but thanks to the wonders of the internet we are now given access to an incredibly broad range of music that was lacking just a couple of decades ago. I doubt that many record labels would have given bands such as these contracts, making the musicians and us lovers of 'real music' the losers, but thanks to their own enterprise and organisations such as 'Simple Life Magazine' most of our musical desires can now be fulfilled.
I've already written in glowing terms about the talents contained in this tremendous band but haven't really mentioned the songs. I'm not going to write sentences about individual songs, but suffice to say that every performance on this eleven song and one instrumental recording is exceptional. There are songs that have become standards in the world of 'old timey,' including Big eyed rabbitt, Cyndie, Sail away ladies, The girl I left behind me and of course the album's title song and what is purported to have been the first ever country recording back in 1923, The little old log cabin down the lane. I would say that the music on this album is as true a reflection of that played in the early days of recording as you will hear. After all, Pappy Fisher and co live in the same area, possibly have similar lifestyles to some of the originals, although hopefully not the extreme poverty to which many were subjected and whilst very much of their time are determined to keep the old music above ground! These are not mere copies of the originals; this bands interpretation is what flows from them naturally and that natural flow just happens to be stylistically the same as the originals, if you see what I mean. Certainly if you purchase and listen to this recording you will understand!
Even if you have never liked or perhaps even, never heard 'old timey' or 'hillbilly' music your album collection won't be complete without at least one recording in this style  so why not start at the very top with Pappy Fisher and his Oldtime Entertainers. You will then have some idea of how music sounds when played by people who are able to define 'good time music' simply by their playing even if the lyrics are not always light in nature, but there is fire, passion, virtuoso playing, hugely atmospheric vocals, a complete lack of self consciousness, good humour and great entertainment values. If you feel unwell or low put it on the stereo and you could find your ailment or mood improving. There is a very good reason for the suffix 'Entertainers!'