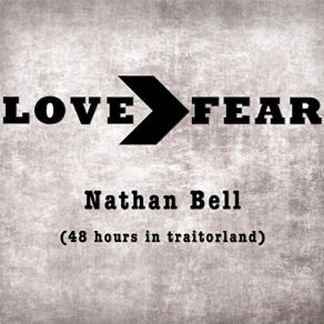 This is Nathan Bell's fifth album, including his sports oriented collection of 'oddballs and demos,' each of them having been reviewed on this site, which should tell the reader something about the perceived quality of his work. Reviewing someone's work on this website is not of itself a guarantee of quality but many other sites and printed magazines have waxed lyrical about the power of the man's songs so we can't all be wrong! Some even compare him to Steve Earle, an easily understood comparison, although I would take that further and say that in my world a new Nathan album is as eagerly anticipated as the recordings of the late great Guy Clark, perhaps even Townes, once were. Listen to his lyrics and you will hear that whilst his background and style may differ from the aforementioned the quality is there for all to hear. I've got to know Nathans work pretty well over the last few years and whilst his first album came into the world oozing lyrical quality there has actually been an improvement since then that has pushed him even further up the ladder to the now sparsely manned upper reaches of quality singer songwriters.
His songs whilst lyric driven have the added bonus in that they often incorporate easy on the ear melodies, despite the sparseness of instrumentation, but above all there is a power in everything he does that even a cursory listen will confirm. Fortunately for him,  being American and a writer of 'folk songs' in the here and now is a time in U.S history when there is an abundance of subject matter, perhaps more so at home than in foreign parts, a chance that Nathan was never going to let go! Not for him the 'boy meets girl; boy loses girl' lyrics, although no doubt he would make a more than capable job of such tales. Not that there is anything at all wrong with that subject matter but he instead chooses to put his beliefs in life and humanity as well as politics. That takes a little more courage than writing simple love songs because you are putting yourself out there to possibly be shot down, so the courage of your convictions is an essential part of writings these perceptive opinions and reflections. Fortunately there is a powerful charismatic feature and depth to his work that lets the listener know there is sufficient strength of character and commitment to carry that out.
On this tremendous album there is just Nathans voice, acoustic guitar and harmonica on the eleven self penned songs that deal with his reflections and observations on past, present and future life along with his philosophies and it was recorded live over the course of just two days in January. It is difficult to summarize the recording by just cherry picking a few of the songs. His music deserves better than that, certainly on this album that doesn't so much write about people as delve into the human psyche and deal with the grittier, often uncomfortable side of being human, with all of our strengths and frailties. There is no sanitization of the stories and whilst all of these lyrical tales and reflections are just one man's poetic, if strong, opinions they are opinions well worth taking note of.
And yet, no one should be led by the idea that this is purely a kick at the harshness of the lives of the downtrodden and as such has nothing to say musically. His raw but warm vocal style and the musicality of this sparsely arranged album give extra depth and substance to a recording already oozing thought provoking depths, in much the same way as the two already mentioned American greats. In fact, I would venture that perhaps Nathans music has more relevance, with the subject matter being contemporary to these times and recognizable by most people, although it could equally be an album that reflects many of the hardships, both political and personal, of the all too frequent crises of the past. Even a song with the title So damn pretty is not necessarily what the title suggests. In Nathans hands it becomes a kick against the shallowness that goes with our perception that someone with great physical beauty has everything that anyone could or perhaps should want, but also suggests that that beauty can mask great depth from the observer rather than just the shallowness of a glossy surface. There is a story to every one of the songs on this tremendous album, snippets of other people's lives, reflections on his own life and protests against the rampant destruction and stripping of peoples and natures dignity for the sake of money and power. Mixed up in all of the darkness there are areas of hope such as on the little oasis in Traitorland (rules for living in Traitorland) that balances love and hope against fear and being dictated to.
So many of the messages on 'protest' albums get lost because of their generalizations but this incredible recording whilst containing some of that element also deals in specifics, sometimes adapting them to generalize but always having great humanity and a depth that the average person can relate to rather than some deep philosophical argument. Add that to Nathans musicality and you wonder how the album can fail to top the best seller charts but that is no doubt the fate that awaits it. There is no one to blame really apart from perhaps, modern life, in which the vast majority of the record buying public don't have the time, or perhaps the inclination, to absorb and distill these tremendous songs. If they did, we would be living in a different world and probably one in which the need for albums and stories such as these would be negated. Oh well; at least the confusion that prevails ensures we will continue to need albums as great and thought provoking as Love>Fear!