KAREN COLLINS & THE BACKROADS BAND –
NO YODELLING ON THE  RADIO 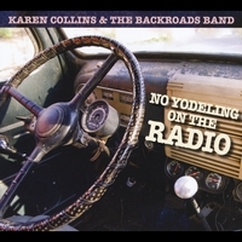 I’ve seen Karen Collins described as a cross between Hazel Dickens and Loretta Lynne, not just because she is, like them, a coal miners daughter but also because she seems to do things her own way. She is a very good songwriter and is in many ways a throwback to the period from around the 1930s to the early 50s with her uncluttered completely natural vocal style. Her voice has a girly femininity; untutored and chock full of character and with an edginess that just can’t be taught. Her songs are rooted in tales of lifes hardships, with her characters not leading glamorous lives or spectacular romances, more normal people trying to get by as best they can.
A bonus, were it needed, is that her band are also high quality musicians, with Geff King who plays electric and acoustic bass, also being an excellent vocalist, whether on lead or harmonies, and also a good songwriter, being responsible for three songs on this tremendous
album, including a very good instrumental, That there boogie. The brilliant Ira Gitlin plays electric and acoustic guitars, banjo and contributes harmony vocals. The sound is rounded out by contributions
from David Lopez and Rob Howe on drums, the incomparable Mike Auldridge on resophonic guitar and pedal steel, Bill Starks on piano and Brian Simms plays accordion. Quite a collection of talent, but one that never tries to overdo things, always allowing these excellent songs the space to breathe but at the same time adding some gorgeous textures and colour.
It’s difficult to over emphasise just how appealing and ‘country’ Karens vocals are. Fairly obviously, considering her background, she hasn’t decided on the music she wants to play, she has come to it quite naturally from birth to the present, and probably couldn’t help but
take this direction. This gives every song, regardless of subject a
believability that most of the mainstream can’t even hope to emulate much less better! She is credited with writing seven of the songs and really good songs they are as well, covering many of the standard subjects in country songs but with her emotive vocals wringing every drop of emotion from each song. The album gets under way with Blinsided, a really good piece of piano driven, raunchy honky tonk about dispensing with a no good man and is immediately followed by the album title song No yodeling on the radio, a tale of reminiscences about old time country music, with some gorgeous yodeling from Karen! The lovely sound of an accordion and melodic guitar leads She dreams, a
song about dreaming of better days, with Karens vocals at their twangiest and most appealing and Brian McGuires Too
much me, not enough you  is a nice honky tonk ballad about the loneliness felt by someone having trouble coming to terms with the aftermath of a broken relationship. Geff King takes over lead vocals on his own Mama’s in a honky tonk downtown, with its gorgeous steel guitar, a sad
song about a family missing a mother who plays in the honky tonks. Parallel lines is the other King penned song and is a tremendous steel guitar led duet with Karen, on a tale of the loneliness of both parties in a ‘trucker’ relationship.
It would be so easy to rave over every song on the album, but buy it yourself and see if I’m wrong when I say that the well used cliché, ‘country music as it should be played,’could have been coined for this excellent album!