THE LOCUST HONEY STRING BAND – HE AIN’T NO GOOD 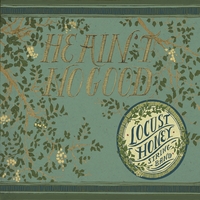 Some will say that because there is only one original song included on
this recording that it is a ‘covers’ album, although as far as I’m concerned there is a lot more to this tremendous female trio than merely being a covers band. This beautifully ‘edgy’ debut has a natural feel that can only be born of people steeped in old timey music, with that authentic, deeply felt otherworldly eeriness that imbues much of the original music. Many of thesongs were originally conceived over the course of many centuries in Europe, transported to America via 19th century immigrants and developed as they settled into their rural communities, to be picked up and further developed in the early days of recording and radio in the 1920s. It takes a huge amount of skill and commitment to be able to raise an echo of those times long gone and this tremendous trio have an abundance of both.
There is a really authentic front porch feel to everything on this outstanding album, to such a degree that it’s difficult to imagine these talented people playing in a studio. But play in a studio they did and despite the excellent recording quality and production this music contains no polish just a very real example of pure country music with the lovely female lead vocals and harmonies always having a hugely appealing edgy rawness that is difficult, if not impossible to replicate. The real Appalachian feel that they seem to bring to everything they do is one that calls up those legendary far off days of the late 1920s when ‘Hillbilly’ music took off. The vocals have an indefinable quality that more than any other modern band I can think of summon up Grel Marcus’  “old weird America,” in many ways matching the originals for ‘authenticity,’ or at least an evocation of it.
The band hails from Asheville, North Carolina, a real hotbed of traditional acoustic music that is not only the home district of some excellent modern bands such as this one, but also has a history steeped in the music, so
their‘authenticity’ really can’t be questioned. The trio consists of Chloe Edmonstone on fiddle, guitar and vocals, Ariel Dixon, banjo, guitar and vocals, with Meredeth Watson on guitar, percussion and vocals and where bass is used on this album Andy Deaver Edmonstone handles those duties. The vocals are very feminine but full of character rather than sweet and cloying, whilst the harmonies are quite stunning with a slight discordancy that is hugely appealing, as if the women are blending their voices but without any of the affectations that sometimes blend harmonies into a characterless beauty. The lead vocals are always good but on every song it is those harmonies that lift and strengthen the authentic feel of ‘old timey,’ with the instrumentation enhancing that atmosphere, particularly the fiddle. Despite the (numerically) limited instrumentation it is an album that always seems to contain plenty of variety thanks to the skill of the musicians and the diversity of tempos that range from slow and moody to a hard driving mid tempo.
Of the generous fifteen tracks three are high quality instrumentals with album opener, Benton Flippen’s hard driving Sally In The Turnip Patch, getting proceedings off to a rip roaring start and highlighting Chloe Edmonstone’s ability to create an atmosphere with her fiddle leading the way and Ariel Dixon’s banjo providing a solid background. This is followed by the Carter Family’s Jealous Hearted Me, which lends itself perfectly to their evocative harmonies and perfectly suited instrumentation with Chloe’s fiddle enhancing the high lonesome atmosphere and the banjo, guitar and bass providing the solidity that gives the song it’s power. The gorgeous Walking After Midnight, is a bluesy, hillbilly evocation of the song made famous by the late great Patsy Cline, but more than matches her version for it’s slightly sinister feel, made more so by the repetitive banjo and with the sawing fiddle playing around the melody. Terrific version of a classic song! Chloe Edmonstone’s own Her Ways, the only original, is far from shamed in this company with the usual strong lead and harmonies pushed along by dominant acoustic guitar and with resonator guitar injecting a little diversity into the sound. The Skillet Lickers Georgia Railroad kicks off with the sawing fiddle on this excellent hoedown evoking song, with banjo, bass and guitar blending beautifully with the fiddle’s dominance. It’s easy to imagine this being played at a Saturday night dance in one of the ‘hollers’ of old, as the original almost certainly was! There is a nice open sound on an unusual treatment to Ernest Tubb’s Thanks A Lot a song that works incredibly well, with the banjo dominating, helped
by guitar and with bass laying a solid foundation and fiddle breaks weaving in and out as on many of the songs on this excellent album.
I love music that is full of originality and whilst this album can’t really be placed in that category (not many can) it can certainly be said that these three hugely talented ladies put their own stamp of individuality and a little originality on some tremendous old songs giving them a lovely freshness, which surely is the whole point. There is very little that hasn’t been done before, although very few have done it better, but it is important to keep old music such as that contained on this excellent recording somewhere near the forefront of the old timey/folk movement which I’m sure is something this album will achieve.