ELIZA MARY DOYLE - IT AIN'T WHAT IT SEEMS 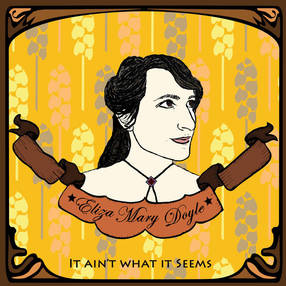 Eliza Mary Doyle has a beautifully feminine vocal style that I often describe as 'untutored' for lack of an accurate description but another description I read recently was 'gloriously frazzled' and I can see what the writer meant. It is just a way of describing someone who doesn't have the refined purity of an Emmylou, a Dolly or any number of other singers, but certainly doesn't lack beauty. 'Natural' or 'without pretension' would be other words but whatever is the best description the sound Eliza makes is stunningly beautiful, character laden and hugely evocative.
I don't know exactly how many albums Eliza has made but there have certainly been 'band' albums as well as solo, plus lots of session work as you would expect from a virtuoso banjoist and someone with such a manipulative vocal style. Anyone who decides to investigate her back catalogue is in for a real treat as I have been after listening to just three of her recordings!
On this album Eliza takes all lead vocals plus banjo, dobro and guitar, Lucas Geotz plays pedal steel and drums, Dustin Olmsted is on lead guitar, Liza Holder, guitar and Paula McGuigan, who Eliza also works with in at least two other bands, on upright bass. I don't know the history of everyone in the band but they certainly sound incredibly comfortable in each other's company so perhaps it's not just Eliza and Paula that have worked together; whatever the circumstances they are all highly accomplished musicians who sound as if they are genuinely enjoying not only playing together but also performing these songs and so they should be! Eliza Doyle is an incredibly talented writer whose songs perfectly suit her vocal style and when added to her command of her instruments I would think any musician would enjoy working with someone so talented.
Banjo and steel guitar along with bass and percussion get things underway on Nothin' to lose, soon joined by Eliza's lovely feminine vocal and some beautiful harmonies on a lovely flowing country song that has a slight edge to it that lets you know that despite the beauty of the song nothing extraneous has been added to sanitize the natural beauty. On Old blue jeans we're treated to a little variety, with the expertly played dobro, supported by banjo, guitar, bass and percussion with Eliza's lovely vocal on another beauty of a song and another that has a memorable melody with some lovely harmonies. When I first heard Say darlin' say I thought it was a reworking of the old song first recorded by Ernest Stoneman back in the 1920s and whilst there are some overlaps this is a complete reworking of the theme rather than just an update and what a beauty it is! Just Eliza's vocal and banjo, with Paula's evocative harmonies create not so much an 'old timey' atmosphere as a completely otherworldly feel. Another beauty of a ballad is High and lonesome, with its gentle feminine vocal and acoustic guitar eventually joined by some gorgeous harmonies and the weeping steel guitar on a genuinely stunning ballad. Could've had it all has an upbeat and up tempo sound on a 'sprightly' lost love song, with fiddle, banjo, guitar and bass on a composition that has a tremendous 'high lonesome' or even 'old timey' sound, despite the  inclusion of an electric guitar.
It is as rare for an album as gorgeous as this to appeal to me as it is to live in a world at peace but thanks to that natural edginess the most raw old 'hillbilly' music has slightly less appeal for me now than it did pre this album! (Although if I'm honest not by too much) This is an absolutely stunning recording and one that I started off liking but have gradually grown to love! It is an album that has everything, from beautiful lead and harmony vocals, great songs, tremendous playing and a lovely natural clarity of sound with no sanitization but plenty of beauty. In fact 'natural' is probably a good summation of one of this albums most appealing aspects, in as much as it has a lovely rural feel and Eliza's vocal is completely unadorned and natural. I've said far too often this year that such and such an album will be a contender for my top albums of the year list. This beauty of a recording is already on that list!