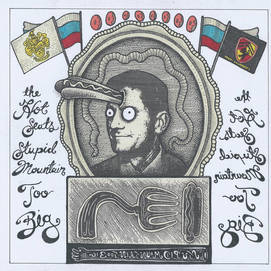 Somewhere along the way The Hot Seats seem to have segued from the mighty Special Ed and the Shortbus, a band I first saw at one of the early Maverick festivals (perhaps 2?) and they were so good I saw them again a couple of days later in a marquee at Barcombe Mills in Sussex! Four of the five members of The Hot Seats were in that highly esteemed band which took its name from 'Ed' Bogan, along with Ben Belcher who is also a member of the even more ' old timey' (and another of my huge favourites) trio the Corn Potato String band along with Lindsay McCaw and Aaron Jonah Lewis, Aaron also having been a member of Special Ed! Hopefully that hasn't created too much confusion!
The Hot Seats now comprise Josh Bearman on overhand banjo, guitar, mandolin, tenor banjo and bass, the above mentioned Ben Belcher plays three finger banjo, guitar and bass and Edward ('Ed') Bogan also on guitar, with Jake Sellers on percussion and bass and Rudy Bzdyk playing fiddle, trumpet, accordion and piano.
It's rare for it to happen but I loved this album from the very first play, in fact before it was half way through I was raving quietly to myself about how great it is. Humour, pathos and just about everything in between makes this generous seventeen song collection essential listening for anyone who claims a fondness for traditional stringband music, albeit stringband music with some updating, played and sung with great skill, fire, passion and faithfulness to the tradition, although not slavishly so. Maybe it's a cop out by me but quoting their own description of their 'style' is better than anything I could come up with so here it is!
'We call it string band music because it's just too tedious to try and get into          whether it's old time, bluegrass, ragtime, country, or general freakout music.'
Exactly right! Well; almost. Their music is all of those plus a few more generic off shoots although I can't say I hear too much structured bluegrass in their sound. I think they have left that sometimes over disciplined sound a long way behind and have segued into something unique that always has that deep 'old timey' tap root. Their sound has the relaxed undisciplined sound of the front porch that can only be acquired by incredibly skilled players who are totally immersed in what they do individually and collectively, creating what feels like an instinctive blend where each knows what the others are about to do and hence draw in the listener with the lovely relaxed, hugely entertaining, atmosphere they seem able to create at will.
The songs themselves are an exotic mix of 'oldies', some from the 1920s and beyond, alongside some of the bands own modern day originals, although I defy anyone unfamiliar with their songs to differentiate between the old and new! (although, perhaps a few of the lyrics give a clue!) The content veers from break neck 'hillbilly' music to gentle reflective ballads and much in between with occasional instrumentals also slotting in, ensuring that however many times you listen to it, the recording is never predictable.
It seems pointless to mention individual tracks, all seventeen being essential to the flow of this tremendous recording that is a genuine encyclopedia of 'roots music' albeit with   string band music as it's essential 'tap root' (and indeed myriad off shoots) even including a little 1950s 'rock 'n' roll' and the above mentioned 'rag time,' perhaps an occasional taste of vaudeville, all performed by musicians at the top of their game.
This tremendous album is a recording that is pretty much essential to any collection of roots music and I think I can virtually guarantee that if 'Stupid mountain too big' is your first venture into the world of the Hot Seats you will feel compelled to explore ever more deeply into their back catalogue, including the equally essential off shoots and predecessors!