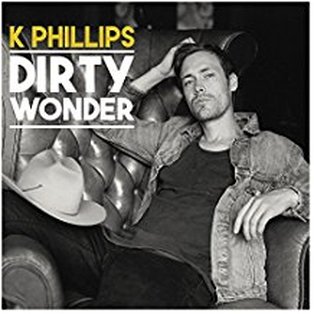 K Phillips has a warm vocal style that is capable of depicting a variety of emotions and tempos on this, his second album. It is stylistically rooted in country, certainly from the point of view of the arrangements, despite many of the songs having the ability to cross over into various other genres. It is certainly a modern and original take on country music and were it not for the arrangements the generic roots would be more difficult, perhaps impossible, to saddle with any particular label. It is that fact that in some ways fits him slightly uneasily into 'Americana,' a catchall term that seems to be getting wider use, particularly if we're not sure how to label someone. (Although some will probably prefer to call him an alt. country musician!)  Whatever the label that's chosen, his powerful sense of individuality lets the listener know he is making his own unique music whatever label we choose to affix.
Named by his disc jockey mother after Kris Kristofferson he now just uses the prefix 'K,' a simple change, but one that creates a little more mystique, never a bad thing in the music industry. However, no one should think 'K' is in need of gimmicks; his talent being more than enough to assure him a successful future in music with his songs that are often quite unusual. There is a sometimes slightly idiosyncratic take on both lyrics and arrangements with the easy going warmth of his vocals and the dramatic dynamism of the music and many of those lyrics blending to make a collection of quite addictive songs.
The album uses as its focal point the breakup of a relationship and its aftermath, an incredibly dramatic situation but one that is not totally lacking in at least a little lightness, certainly in K's perceptive writing. The single Hadrian even has Adam Duritz helping out on vocals and the hugely talented 'Band of Heathens' songwriter Gordy Quist handling production duties. The songs are incredibly varied stylistically, with some of the arrangements being relatively sparse and having a lightness of touch whilst others are dark and deep but all are excellent and have a high degree of originality. I've already rambled at some length about his stylistic leanings and whatever label should be laid on him, but the simple fact is that whilst the album already has a country label, there is so much more going on. Some songs slot into the various country sub genres, but what adds to the originality is that some elements in use are generically ambiguous, with distant echoes of jazz, perhaps a little blues and to be honest I'm not sure what else! After numerous listening sessions I'm still not sure.
Things get going with Had enough with its thudding percussion and bass partnered by a melodic electric guitar lead and a relaxed vocal from K on a song that depicts the falling apart of a relationship, with the sad dramatic quality intensified by the beautiful gospel harmonies and weeping dobro. 18 year old girls has a deep sound with thudding bass, percussion and a powerful guitar sound with some excellent use of slide that adds to a tremendously dynamic sense of drama and with some excellent harmonies and a swampy guitar solo and indeed an overall sound that evokes a strong swampiness. A gorgeous steel guitar allied to piano deepens the beauty of Rom com, with the usual excellent percussion and bass sound and some haunting female harmonies on a song that has a strange, almost otherworldly arrangement despite a contemporary structure, although contemporary with who I couldn't say! As the song concludes there is a feeling that the song is going to drift into psychedelia, although it never does and that strangeness is not really all that strange, just different, adding another large slice of originality to an album that is already imbued with more than its fair share. The final song on the album Hock the horses is another strange otherworldly 'country' song that is rooted, and deeply at that, in the 'spaghetti western' genre. It starts with an eerie organ that is soon joined by the thudding bass and weeping steel guitar, with Ks warm vocal giving the song, at least for a brief spell, the feel of something Lambchop once cornered the market in. The incredible female vocals and  harmonies add to an atmosphere that can almost be cut with a knife such is its depth and intensity. It is a song that has to be heard rather than written about to even begin to  understand what is going on.
In many ways artists such as K Phillips are modernizing 'traditional country music;' not in terms of over using studio technology or modernizing for the sake of modernizing, but simply using their own influences, which are far more wide ranging than those of the 'old time' originators of the style, whilst still having roots that are traceable to traditional music. There is more than enough space in country music for people who play the old time version of country music and those that choose a slightly different updated path that progresses the music without adding any sanitization. This tremendous album proves that point. Give yourself a treat and purchase a copy; you know you deserve it; equally K Phillips deserves to be heard by a wide audience!