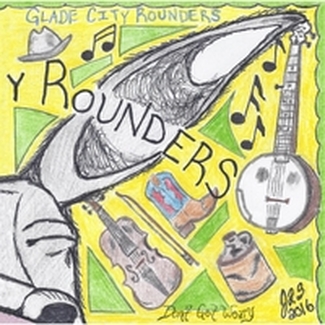 I wrote a rave review of the Glade City Rounders tremendous debut album 'They're After us' early last year, enjoying it so much that I made it one of my albums of the year. As a consequence i've been eagerly awaiting the arrival of this new recording titled 'Don't get weary' since first receiving notification that they were working on a follow up. How many times has a brilliant debut been a false dawn? I'll tell you; much too often for my liking! So the question has to be, was 'They're after us' a false dawn? (Cue sighs of relief) It most definitely was not! I actually wasn't expecting it to be either, although I've been wrong so often I almost feel like I'm breaking a habit with this tremendous but much too short eight track recording that clocks in at a little under twenty five minutes.
This extravagantly gifted trio of musicians has such a natural feel for this music that they all grew up with, that everything just flows. There shouldn't really be any surprise there either because the trio of William See on fiddles, vocals, kazoo and harmonica, Josh Smith, guitar, jug and vocals and Richard McLain on banjo, vocals and kazoo, all hail from and still live in middle Tennessee.
Maybe the recording is only twenty five minutes long but what a high energy virtuosic twenty five minutes they are. There is no sanitization or softening of anything the trio does, with the vocals raw and the playing full of fire and passion as befits a band that have been described to me by a couple of people who have seen them live as 'the best live band I've ever seen, bar none' and one of those people has seen many of the greats!
Stylistically they are an old time string band who play everything from rural blues to jug band music, with a little hokum and 'hillbilly' attitude thrown in for good measure. In a nutshell, you name an old genre and I'm pretty sure they will have songs that fit, but all played in their own inimitable style! There are occasions when there are detectable elements of more than one of those styles in individual reworkings of the mainly old songs with which they express themselves, in some ways bringing a little originality and modernity to their music. Just five songs and three instrumentals make up this all too short album but putting it on constant play is no hardship at all thanks to the variations in style and tempo's and the always exuberant feel this talented trio bring to their recordings.
The album kicks off with Georgia Crawl, a classic old timey song and a tremendous version of it that genuinely evokes the 'hillbillies' of the 1920s but without all of the crackles and pops. The harmonica brings a nice touch of diversity, allied to banjo, guitar, jug and raw lead and harmony vocals. We are treated to more raw, evocative vocals on the classic Blues In A Bottle, another excellent version of an old song, with the same instrumentation as previously, but because they rotate the lead there is always a feeling of diversity within these eight songs. Stylistically, their influences must have been greater and more varied than the originators of these songs and tunes, ensuring that their blend of styles, whether blues, folk or old timey is seamless, but with the modernity that recording, in the main, nine or so decades after the originals would ensure. Ruffle Drawers is an excellent instrumental led in the main by fiddle, with banjo, guitar and jug adding depth to a tune that could as easilly have been played at a ceilidh as a hoedown! On Viola Lee Blues the kazoo gets things under way on a classic old blues song, with banjo, jug and guitar adding to the mix with the usual evocative vocals.
The powerful attacking folksy style that ordinarily would be described as 'having an authentic feel' can't be assigned to the Glade City Rounders. They actually are completely authentic! Rather than just working towards sounding that way, this music flows from them as naturally as exhaling! They have the history of these old styles oozing from their pores, allowing the listener to either get up and dance or, like me, simply sit back and let this old music flow over you, knowing what you are hearing is a reworking of old songs and styles that is being played with the same skill, fire and passion as it's now long dead originators. Long may they continue to do so.