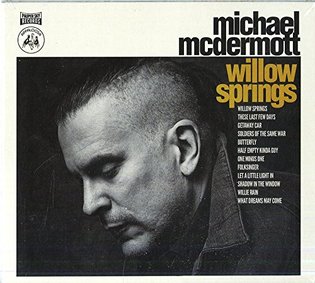 ​Footnote:
It is rare I receive an album that is so moving and that I can relate to in its entirety. In fact I don't remember ever receiving such an album; that is until this one came into my possession. I can actually relate to nearly every song, not always through personal experience although much of it is, but through the hitherto unknown depths of emotion that he has plumbed and the roller coaster the recording takes the listener on. Take Willie Rain. Michael McDermott just doesn't write, much less record, songs such as this. Or at least he didn't until now and to do so he must have almost literally opened his soul, all brought about by one little girl. That little girl and her mother Heather have shown Michael, whose past has been well documented, that not only is redemption possible but that he has actually gone a long way towards achieving it, despite the constant difficulties in hanging on to this most tenuous of states. I've never been to prison, never been a drug addict and never been an alcoholic, some of it more through luck than judgement, but in so many ways I envy the man for his ability, desire and the strength to be able to open up his heart and soul in such a way. It is impossible to imagine how difficult it must have been to reveal these inner feelings but I for one thank him for doing what most of us are totally incapable of. Quite how he will follow this once in a generation recording that in many ways provides closure on a long difficult spell I don't know, but I'm pretty sure he will have a damn good try.