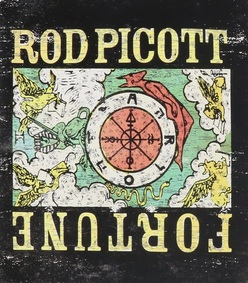 Rod Picott is a gifted singer songwriter with a more than worthy catalogue of at least eight excellent recordings by my reckoning, including this latest release, plus 2008s 'Sew your heart with wires' which he made with the equally talented Amanda Shires. Often described as bridging the gap between Folk and Americana, as usual nothing is quite that simple for someone who, when he first started, had a flexible approach to a variety of generic possibilities, more less ignoring any boundaries and going his own way. That diverse direction is the thread that has followed Rod Picott throughout his career, always firmly within the wide ranging 'roots' field but ignoring any stylistic distinctions, making it as likely for some songs on an album to have a country feel, followed perhaps by blues, folk or just about anything else that takes his fancy.
Of course, he is more fortunate than most singer songwriters, possessing a voice that is both manipulative and expressive, able to be gentle and warm on a mellow ballad and then goes into what can almost be described as a young Tom Waitsian mode on the more esoteric tales, even at times creating an atmosphere that echoes the haunted mournful elements that distinguished the late great Townes Van Zandt. It is all of these elements that allow him such variety in the tone, textures and all round variety of his songwriting, although the fact that he is a highly accomplished songwriter in the first place is a great advantage!
All of the songs on this outstanding album were written by by Rod Picott with the exception of Until i'm satisfied and Drunken Barber's Hand which were by Rod Picott and Slaid Cleaves, This world is a dangerous place by Rod Picott and Ben Glover and Spare Change by Rod Picott and Ryan Culwell. The band that he put together to help out on this recording are equally as talented as his co-writers with Will Kimbrough handling the electric guitar parts, Neilson Hubbard doubling as the group's drummer as well as handling production duties with Rod and Lex Price on bass.
The songs vary from gentle mellow ballads, several that get close to country rock, as well as several nice percussive songs that are reminiscent of Tom Waits, all performed with flair and originality and perhaps more importantly, lyrically excellent. Because of the diversity there is a quite original feel to the recording with many of those lyrics, despite the sometimes gentle melodic tone, full of a gritty poetic realism. It's difficult to imagine how an album can hold together so well with all the diversity of styles that is going on in these twelve songs but the fact is it does. They may not fade into each other but the variety keeps the listener off guard, wondering what will come next, even after repeated listening sessions.
There is a nice percussion and bass accompaniment on Until I'm Satisfied an excellent song with melodic electric guitar and strange otherworldly harmonies. As the song progresses it becomes apparent that the percussion is the lead instrument and the song has a Waitsian quality, although Rod's vocal is much less rough! I Was Not Worth Your Love is an excellent mid tempo ballad with chiming electric guitars on a song that could easily have been plucked from one of the better 1970s 'country rock' albums and it's to the acoustic guitar on Jeremiah, an incredibly sad ballad of the effect on family of a soldier being killed overseas but told from the perspective of his wife. Uncle John is a song that with it's percussive arrangement again has Waitsian echoes although Rod's voice is far more melodic! The arrangement is exceptional with the percussion beautifully countering the lovely melodic guitar sound, intensifying the sense of drama and enhancing the melodicism. There is a spooky atmosphere on Drunken Barber's Hand with the almost threatening percussive sound, creepy slide guitar and banjo that weaves in and out of the song with Rods restrained haunting vocal bringing an even deeper air of sinister mystery to a powerful and edgy tale. The album closes with Spare Change a gentle ballad but with a haunting electric guitar sound and slow metronomic thumping percussion leading the listener to go back to track one and go through this musical roller coaster again and again and .....!
I wasn't expecting this tremendous album to sound the same as his previous recordings and so it proved, but Rod Picott has an innate ability to make albums that always have something different in their makeup to his previous recordings and indeed to what anyone else is releasing. His songs go into areas of great diversity which could well be what keeps him off the 'mainstreams' radar and enables we fans a certain smugness. I suspect that this excellent recording, if it is heard by any mainstream 'money men,' will change all that!