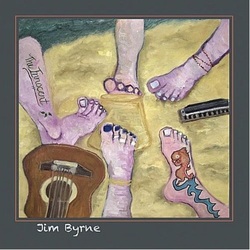 This unusual album is a blend of British and American folk that produces a mellow sounding, almost comforting album despite the malevolently dark opener Fancy Wooden Box. After that tremendously atmospheric start you could be forgiven for thinking this is going to be one of those dark scary albums, but really the opposite is true. Its basically made up of relationship songs some of which are rooted in reflections on deep love, many of which do actually tug at the heartstrings.
Jim's vocals are deep, rich and full of character with his slow moody croon at times best described as talk vocals on this quietly restrained album that contains some high quality poetic songwriting and sparse instrumentation. In many ways this is a brave recording, with the slow moody sparseness leaving the vocals exposed, but in this case it works incredibly well giving the album added character which, due to the strength of the songs, just serves to enhance the recording. At times his ‘talk’ vocals on this album are reminiscent of Leonard Cohen or Sam Baker, with the big difference being that Jim’s voice is much more melodic. He is obviously helped by the fact that this is a very clean well produced album with superbly well chosen instrumentation, added to which his always classy guitar playing skills add even more character to his well written songs.
Of the ten songs on the album four are written solely by Jim, four are co-writes with his wife Pat and the other two are covers. The first of the covers is Jack Rhodes & Joe Hayes classic Satisfied Mind, that actually benefits from this slow moody treatment with it’s banjo and harmonica support. The other is Alex Chilton and Chris Bells Thirteen, a song most men with memories of their youth can relate to, here with just acoustic guitar, again done entirely differently to the original by Big Star but it does work well. Jim’s self written album opener Fancy Wooden Box is a highly descriptive tale of a man waiting to be hung for murder, with just acoustic guitar and a few harmonies, but which despite the sparseness and the harrowing theme is a memorable song with a really catchy tune that seems to stay with you. Two Empty Chairs is a highly evocative song that has the backing of a gorgeous accordion, plus acoustic guitar and banjo, whilst the piano backed slow mellow love song, Sand in our Shoes evokes romantic evenings on a sandy beach, with the instrumentation being just about perfect as are the harmonies, giving the song a strange almost friendly atmosphere. Not everything works as well though. I thought the lullaby, Sleepy Head was a little over the top but I’m guessing that it has huge significance to Jim and Pat Byrne.
It is certainly not lively dancing music and whilst some will find the lack of any real pace not to their liking, others will enjoy the album for that very reason!