THE OLDTIME STRINGBAND -
CAT'S GOT THE MEASLES
​ 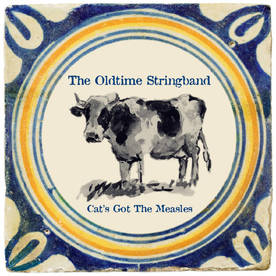 Four Dutch men and an American woman got together three albums ago and formed the Oldtime Stringband, their name giving much more than a hint as to what they are about. It's been proved over and over again that you don't have to be American to master that 'authentic' front porch 'hillbilly' music and boy do they master it, as they proved on their two previous recordings, although this one seems to have actually improved on the excellence of its predecessors.
As with their first and second albums this one has a hugely appealing 'ramshackleness' to it. That is not intended as an insult, far from it, but they create the impression that they are a high quality (true) pick up band who have got together on an old Appalachian front porch and are relaxed in each other's company and playing songs as they come to them, but perhaps most importantly, having completely unbridled fun in doing so. At times you can almost see the smiles on their faces as they work their way through these thirteen tremendous performances. They originally formed to provide a musical backdrop to a documentary about 'cow painter' and band member Ruud Spil, but as they and the audience had such a great time it was decided they would stick with it.
The talented five piece band consists of Shelly O’Day on vocals, guitar, autoharp and Cajun-triangle, Ton Knol guitar, mandolin and vocals, Ruud Spil plays banjo and vocals, René Boerrigter on fiddle, mandolin, cajun accordion and vocals and Nico Druijf on upright bass, vocals and singing saw and Tim Knol (Ton's son) helps out with an excellent vocal on Bumming an old freight. All of the songs were recorded live and 'in the round' at The Church studio in Wijdenes, Holland, to try to protect their usual 'front porch' vibe, something they succeeded in beautifully. Mixing was kept to an absolute minimum for the same reason, so foot stomps and other live sounds, of which very few are noticeable, were left in. Of the songs, nine are traditional, one was Dwight Yoakam's Miners' prayer, another Iris Dements beautiful Our town and the first and last tracks were excellent Shelly O' Day originals. There is an authentic feel to every song and they perform with a natural fire and exuberance that is absolutely essential in the creation of that good time feeling so essential to much of the music recorded back in the 1920s and 30s.
Things get underway with a full sound on Shelly's Take me away with her excellent and expressive lead vocal showing the way, with male harmonies on the chorus and a nice fiddle break. The song veers stylistically between the early days of recording and the twenty first century and whilst her vocal has a modern sound some of the lyrics carry references to the 'old days.' On Bumming freight train there is an excellent high lonesome lead vocal from Tim Knol, (Tom's son) with tremendous support from the usual instrumentation and Shelly's excellent harmonies enhancing the atmosphere whilst the restrained male harmonies give the song a truly epic feel with lovely fiddle, percussive banjo and bass. There is another excellent lead vocal from Shelly and harmonies from the men on Cotton mill girl with a full sound and excellent short breaks from guitar and banjo on a traditional song that really emphasizes the hard life led by the women and girls who worked in the cotton mills. There is a a 'hillbilly stringband' version of Dwight Yoakam's Miner's prayer that works beautifully, with Nico providing a sprightly lead vocal, with some excellent harmonies and playing by all creating a natural atmosphere that the original perhaps lacked. Final mention is of a lovely rendition of Iris Dement's Our Town with Shelly on lead vocal and a restrained instrumentation that includes acoustic guitar, fiddle, banjo and bass, allowing the vocal to dominate the song as it should do.
The fact that four fifths of the band don't hail from the U.S is of absolutely no significance thanks to not only their musical talent but their powerful feel for and pleasure taken from these old musical forms. I suppose it could be argued that much of the 'old timey' musical roots were first heard in Europe so perhaps it is more a question of the music finding its way home, but whatever the historical details this is another tremendous album by a band who only formed by chance. They've taken that chance and turned it into, at least artistically, a musical success story. Now all we need is an enterprising promoter to bring them to these shores for a tour!