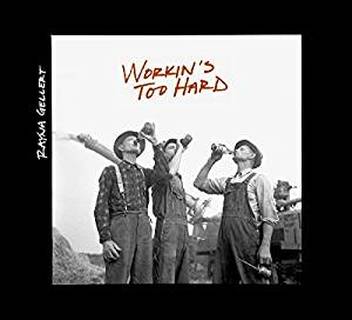 This recording consists of just seven songs and clocks in at a little over twenty three minutes but it is absolutely no hardship whatsoever to keep the disc on repeat play, such is the quality of everything about this beautiful, sparse recording.
Whilst I'm sure she would love to sell millions of albums Rayna Gellert has never been attracted to the 'commercial' country music world, instead choosing to plough her own highly individual but 'real' country music furrow that is rooted in the genuinely traditional country music, or perhaps more appropriately 'old time,' world. It depends on the listener's perspective really on how to define her beautiful recordings. Many look on 'traditional country music' as being that which came to prominence with the 'Nashville sound' of the 1950s onwards, whereas I (and many others) view it as a direct link to the music that preceded it, going back to the early days of recording and 'old timey' or 'hillbilly.' It is the latter that Rayna is absolutely steeped in. What enables her to stand out from the crowd is her gentle updating of those ages old genres, making it relatively easy to trace her influences back to the musicians of perhaps the 1920s and 30s. We then jump most of what followed, eventually landing in the 21st century with a tastefully updated but still true to the originals music with an 'old fashioned feel,' but with songs and performances that are very much written and performed by a young woman of her own time but with much more than just a nod to the tradition.
Rayna has so far had a colourful recording career with several solo albums, duo albums with artists such as Abigail Washburn, an album with the Lonesome Sisters and of course the two albums she made as a member of the peerless Uncle Earl.
Of the seven songs on this beautiful recording five were written by Rayna, with two of those being co writes with co producer Kieran Kane, and the other two both traditional. Musically, she was helped out by Kane on mandolin, guitar and vocals, multi instrumentalist Kai Welch and with Jamie Dick on drums. The sound is always sparse with the beautifully played instrumentation serving to add colour to the songs rather than any over dominant histrionics.
Proceedings get underway with the title track, Workin's too hard, with its lovely mellow, melodic guitar sound and Rayna's beautiful vocal and the occasional harmonies leading  to a powerfully mature song and a hauntingly beautiful production. Rayna's vocal has a natural, beautiful plaintive quality that helps add a timelessness to every song, with the gorgeous softened electric guitar sound on this track bringing a little modernity to proceedings. It is followed by River town, another excellent song, this one with lovely strummed acoustic guitar and metronomic percussion along with mandolin and occasional twangy electric guitar. It is a composition that has strong elements of modern 'folksiness,' with Rayna's vocal having a more forceful ambiance and with some lovely harmonies on a thematically timeless, powerful tale. Finally, I'm bound for the promised land has a chunky, funky guitar sound with a powerfully solid percussion and 'hillbilly' fiddle making this gorgeous rendition of an ages old traditional song completely unique. It has an entirely different arrangement to previous versions and yet despite the originality the song still has that haunting ages old atmosphere with Rayna's 'grounded' vocal mainly responsible!
In some ways this incredible recording can be said to be a 'missing link' between the old and the new with her utterly timeless music that draws ages old folk music styles into that which it became, in this case 'real country music.'