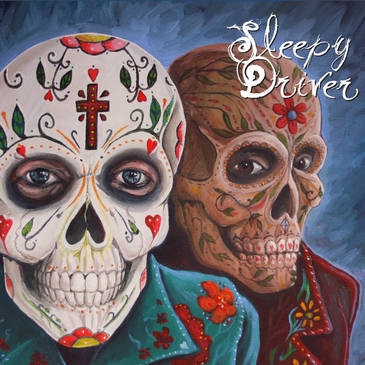 From Fredericton, New Brunswick, Canada, it's ten years now since Sleepy Drivers formation and 'Sugar Skull' is their fifth full album (and one e.p.) in a recording career that has stretched from and including their excellent 2011 debut album 'Steady Now.' This is their second release of 2017, following on from the excellent and unusual 'late night music' of 'Decomposed,' released in the spring this year. I reviewed their impressive 2012 album 'Ignatius' and have to say that this new recording at the very least maintains the quality shown back then and in many ways is more expansive and confident.
As with their previous work, 'Sugar Skull' is difficult to give a generic label but suffice to say it is an album that ranges from an excellent brand of quite heavy indie 'rootsy' rock to country rock/ alt. country, with a nice variety of tempos from slow and moody to hard driving upper mid tempo, often with a quite ferocious sound. They are often labeled as an alt. roots rock band which certainly fits them, at least up to a point! As I've already said there is certainly a heavy dose of rootsy rock but there are also strong elements of country rock and alt. country, although none of the genres have hard and fast edges, more a blend of all these elements and more often within the space of one song. Sometimes there is even included a slightly unsettling spookiness or at the very least a dramatic quality slotted in amongst the excellent vocals and strong melodies. Whilst their music is not 'reinventing the wheel,' Sleepy Driver are certainly in the upper echelons of this loose combination of generic fields thanks to the excellence of the writing, playing and the vocals that are tailor made for alt. country, roots rock.
This incredibly tight, highly skilled band consists of Peter Hicks who wrote the songs and handles lead vocals and guitar, Dave Palmer is on pedal steel, Barry Hughes, drums and vocals, Mike Hatheway is metronomic on the bass, John Heinstein on keyboards and Ethan Young-Lai plays guitar. Hicks cleverly written songs are incredibly varied; I suppose with vocals of the quality of his no singer is bound by a certain style or tempo, allowing him to explore his musical imagination as the mood takes him. O
The album gets off to a good start with jangling guitars, thudding bass and evocative lead and harmony vocals on Unpromise, a 'hooky' song that sets the scene for some of what follows, at least in terms of quality. There is an excellent guitar break mid way on a melodic mid tempo easy going roots rocker that even includes a brass intervention that is never overdone. A gentle acoustic guitar introduces us to Before we go home, soon joined by bass, percussion and tuneful electric guitar aided and abetted by the weeping steel and excellent lead and harmony vocals on a 'big ballad' but one that has a believable edginess. Believe/Belong gets off to a dramatic start with the sound of the wind and chiming guitar accompanied by the piano on a tale that is deep and dark but still melodic with excellent lead and harmony vocals. The sense of drama and depth gradually increase as we progress through the song, an incessant deep tone guiding the way and building the dramatic atmosphere and just as it starts to drift away the sense of doom is lifted by a change of tempo and colour, with the weeping steel guitar leading the way. Rubies, diamonds and pearls provides a perfect end to an album that is varied thematically, generically and in terms of tempo's with an excellent 'country' ballad. It is performed at a gentle tempo with the weeping steel guitar to the fore, with occasional keyboards and the usual percussion and bass, with an excellent lead vocal from Peter Hicks and some sympathetic harmonies.
Sugar Skull is a short album, clocking in at a little over thirty three minutes, meaning the band perform their songs with all the variations that entails and are then gone, never overstaying their welcome, although if the album was twice that length the same would apply. Despite the brevity there is much packed into these ten excellent songs and whilst I wouldn't say I like everything on the album there is nothing that feels wrong, with all of the various generic offshoots being beautifully performed and believable from a band that seem able to master most sub genres of 'roots' music, even including a little bluesy rock. Variety being the spice of life, this is definitely an incredibly tasty morsel that you will never tire of as part of your musical diet!