VIVIAN LEVA - TIME IS EVERYTHING 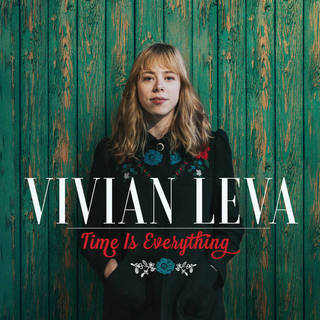 Country music is and always has been rife with, often sickening, sometimes sycophantic clichés although when first coined they were usually at least a fairly accurate description of someone or some persons, after which we all got on the band wagon and brought them into common use lessening the impact. Despite that, some of those clichés still hold true. In this case one of them is completely accurate and that is to describe Vivian Leva as a 'genuine breath of fresh air blowing through country music,' the evidence being 'Time is everything,' her wonderful debut album.
She grew up and still resides in Lexington, Virginia so it's no surprise that this talented young lady is so steeped in the music of the Appalachians, but with a little 'modern country' in her musical makeup rather than sticking rigidly to the purity of the Appalachian music tradition. It is certainly there in abundance but she has allowed the music to develop with a few modern influences, although most listeners will easily be able to pick up on where her roots lie.
Whilst the album has been released as a 'solo' recording by Vivian it seems to be the case that she and Riley Calcagno are a duo, Vivian having her own website as well as sharing a duo website with Riley. Eight of the albums ten songs were written wholly by Vivian or in conjunction with Riley and there is a beautiful version of Paul Burch's Last Of My Kind, and a re-composed version of Virginia ballad singer Texas Gladden’s Cold Mountains, for which the pair wrote a new chorus. The recording was made at Joseph DeJarnette’s Studio 808A in Floyd, VA, with virtuosic assistance from multi-instrumentalist Riley Calcagno, as well as Joseph DeJarnette (The Wiyos) on bass and production duties with Jack Devereux, Eric Robertson and Nick Falk adding fiddle, banjo, pedal steel, and percussion. The sound is always sparse, allowing the power of the songs to really shine through, in fact much of the album has the supreme quality of a Gillian Welch, David Rawlings recording although like them Vivian has her own distinctive, unique style that I'm pretty sure will soon make her easily identifiable to most who hear her.
There is a lovely blend of rural and urban styles to not only the songs on this album but also to Vivian's voice. She can sing in an urban 'contemporary' country style with the very best of them, always with a lovely rural 'twang' and is totally at home with the high lonesome rural Appalachian compositions, able to create an atmosphere in which the listener can almost smell those mountain streams and forests. A nice twangy guitar with bass and percussion supports Vivians, gorgeous, evocative vocal on album opener Bottom of the glass and is soon joined by the lovely steel guitar. There is an excellent twangy guitar break during this song on which Vivians voice displays both maturity and a lovely strong rural atmosphere that few other women in country music can match; most that could being sanitized by the 'Nashville music machine.' Not so this talented young lady on this easy going lower mid tempo song. Time is everything is a slower song that includes gentle guitars and haunting steel guitar from the start with some excellent male harmonies, presumably Riley. The song takes on a nice shuffling percussion with several tempo and textural changes giving it a much greater impact. A hard driving fiddle with banjo and bass gets No forever off to an upbeat, uptempo start and then Vivians lovely evocative vocal comes in with Riley on harmonies on another tremendous song, this one creating a warm rural atmosphere. There is a dynamic fiddle intro on Why don't you introduce me as your darling soon joined by the steel guitar with solid percussion and bass on a song that has more of a contemporary country feel although Vivians beautiful vocal seems to me to root the song in the 'country and western' sound of the 1940s to 50s. It also seems to draw in western swing influences blending with a Kitty Wells sensibility. In other words a beautiful mash up of classic country styles that ultimately creates something pretty much unique.
'Time is everything' is not sanitized modern country music but a genuine development of traditional country and by that I don't mean 'honky tonk,' or the various country offshoots, but the real tradition that is descended from the old time 'hillbillies ' of the 1920s and 30s. There is nothing wrong with the various offshoots but this recording quite naturally follows the same stream as the originals rather than creating extra tributaries that go off in an entirely different direction. It is a quite stunning album by a hugely talented young lady and proves that 'traditional' and modern country music can be blended without the need for any added gloss or over production.