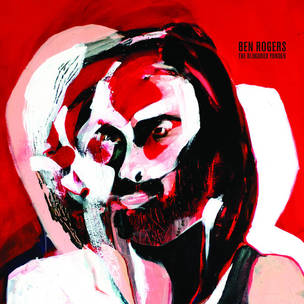 Canadian native, Ben Rogers is the possessor of a raw, yet melodic and incredibly evocative vocal style that is perfectly matched to the powerful tales he tells. He is a hugely talented teller of often believable and epic stories, many having a depth of darkness that is quite harrowing.  The majority of those stories are quite literally cinematic and whilst not necessarily sparse lyrically, he seems to have the ability to paint his word pictures with the quality of his literacy rather than recourse to sheer weight of numbers, whilst still telling epic stories that are often incredibly broad in scope. He attacks the subject matter from a variety of angles enabling the listener to frequently become familiar with the cause, the action and sometimes the consequences. Ben wrote all of the ten songs although on Panhandler he was helped out by 'The Universal Cowboy' and on Don't Buy Me Roses by Johann Carlsson.
He had some highly skilled assistance on this recording, with the band being made up of Ben on lead vocals, acoustic guitar and harmonica, his brother Matthew, who also made an excellent job of production duties, on guitars, piano, keyboards, percussion, autoharp and vibraphone, Matt Kelly on pedal steel, wurlitzer, piano, organ and backup vocals, Erik Nielsen, bass and vocals, John Sponarski on electric guitar and vocals and Leon Power on drums and vocals. The arrangements, and consequently the instrumentation, show a lot of imagination and originality on this extraordinarily varied album that plummets to a deep darkness that is occasionally offset by a little light, with tempos and sentiments that are just as varied.
His debut album, 2013s excellent 'Love stories, vol.1' was a much sparser affair than this tremendous follow up and yet despite a greater variety of instrumentation nothing is added that can be said to be extraneous. This recording contains songs that seem to have a far greater depth of darkness to them and whilst stylistically that previous recording was described as having a strong dark folk leaning with a little bluesiness, this one certainly contains those two elements but the overriding feel is that of a 'country' album but a million miles from the often bland or sanitized 'mainstream.' Some of the darkness on these songs is all enveloping, making the listener realize that perhaps their problems are not quite so bad after all, although of course, the darkest of these stories are hopefully not taken from Bens life, but the innate sense of drama and the evocative telling gives them a realism that many of his better known 'singer songwriter' peers would probably kill to be able to emote!
The album commences with Wild Roses, a song that includes a nice twangy guitar accompanied by steel guitar and a hauntingly raw, evocative vocal from Ben on the tale of a forsaken lover. In many ways it qualifies as an update of 'classic' country, albeit one that segues into an incredibly dark and hauntingly harrowing murder ballad. It was quite brave putting such an accomplished song at the start of the album but what follows is far from being put in its shade. Next up is Wanted, an up tempo 'rock n roll' song that tells of someone who is wanted by everyone except the one he wants! There is some rolling piano and excellent guitar work on a song that is a complete contrast to its predecessor. Goodbye Rosa Lee is a sad ballad that tells of the end of a deep love affair. There is a gorgeous atmospheric steel guitar on this slow moody song that you would really expect to be picked up by one of the big country 'stars.' The lyrics are both descriptive and poetic, with a lovely melody and catchy hook and even the instrumental break has a lovely clear spacy feel. The More I Learn is an easy rolling song that has a nice light touch with a sometimes comedic element but with a strong lyrically philosophical edge and another excellent arrangement that whilst being countrified by the steel guitar could easily be adapted to just about any genre imaginable. The tenth and final album track is Darling Please, a sparse moody ballad with very little instrumentation on a tale of pleading for a lover to come back. The song is performed at a funereal pace with a little background instrumentation that helps to highlight the hopelessness of his situation and the darkness in his mind.
Whilst thinking his debut album was excellent this new recording takes Ben Rogers music to a higher level and one that is rapidly leaving his peers in the loose generic field of roots music in his wake. If he carries on like this he will have no peers! A tremendous album that more than repays repeated listening sessions.