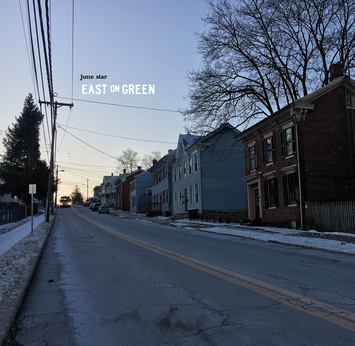 There may have been a few lineup changes during the now two decade's long career of June Star, but the real constants in that time have been the leadership of Andrew Grimm and the unwavering quality and originality of the music. Add to that Andrews highly individual and powerfully evocative vocal style that can't be mistaken for anyone else's; a style that displays his ability to go through a variety of emotions, situations and tempo's then add his peerless writing and the sheer dynamism and originality of everything this talented artist/ band produce and what more could any roots music fan wish for? I hedged my bets over the artist/band situation simply because Andrew is the singer, songwriter and no doubt visionary of every album and musical direction since the bands inception twenty years ago, for most of which time they have been one of my all time favourite bands.
The lineup on 'East on Green' is Andrew Grimm on vocals, guitars, banjo, harmonica and all song writing, Kate Field, vocals and acoustic guitar, Andy Bopp, backing vocals, guitars, percussion and organ, with Cody Harrod on bass and Kurt Celtneiks on drums. The quality of the playing, whoever happens to be in the band at the time, has been another constant with every musician bringing their own style and support to each and every song.
This new recording shows some changes from previous albums, the major one being the linking of the songs with snippets from police radio communications and whilst not obviously conceptual, never the less tells stories of life that can all be interlinked. The depth and power of the songs is often enhanced by a moody, mellow sound that is offset by powerful or dark lyrics whilst at others it may simply take the listener in with a beautiful melody before the realization dawns that they are actually listening to an often heavy dark tale!
The first song, Break, comes in, after the first brief conversation between an on duty police officer and controller; with fiddle, mellow banjo and acoustic guitar, soon joined by Andrew Grimm's lead vocal. A restrained bass adds depth and a solid foundation to an excellent slow moody ballad that creates a powerful, emotional atmosphere on a tale of someone for whom there is little chance of toeing the line and therefore in all probability a high price to pay. Following that slow and moody start a fuller sound gradually emerges with the song slowly taking on an epic almost cinematic quality that is backed up by a lovely developing melody. On Spin there is a gentle acoustic guitar intro with Andrews lead and Kate Fields harmonies blending beautifully. A heavily strummed guitar adds a slightly threatening atmosphere to a dark tale and eventually there is a harmonica break with melodic guitars for support before the two vocals come in again on this gentle but deep song. Lovely chiming guitars get things underway on Town limits before Andrew comes in with an excellent lead vocal blending with Kate's lovely feminine harmonies on a song that in many ways treats escaping the poverty of small town life the same as the desire to escape the Hotel California back in the mid 1970s. The situation is different but the end result 'you can never leave' remains the same. These are certainly not tales of decadence brought on by rock star lifestyles but are the complete opposites being tales of darkness and life on the 'wrong side of the tracks,' albeit tied up in some beautiful melodies and powerful arrangements. There is a twangy guitar intro on Loneliest with Andrews vocal blending beautifully with Kate's on what is basically a duet, but one that tells of abject loneliness and possibly a crime of passion? A lovely mellow sounding fiddle adds depth and power to the proceedings on a heart rending tale of people for who there is only darkness at the end of the tunnel and little or no chance of redemption. Final mention is of The Street, driven by a heavy propulsive electric guitar and percussion with deep throbbing bass on a beautifully written song that also contains an excellent lead guitar break on a tale of addiction and living on the street. Whilst the song has a beautiful melody the combination of that and the lyrical content works beautifully as the emotions are lifted by the beauty of the melody and knocked back by the darkness of the lyrics. Whilst many of the lyrics are dark and gritty there is nothing about them that doesn't smack of realism and of course there are always those uplifting melodies to assuage the sadness and yet there are, as in the saddest of lives, little oasis of light.
At the root of every June Star album are tremendous melodies, great songwriting and highly original arrangements all tied together by the excellence of the playing and capped off by the expression and atmosphere that is created by Andrew Grimm's lead vocals. This tremendous album raises the bar with its depth and variations in just about everything from the stories to the tempos and the all round dynamism of a recording that is sure to feature in many years end lists. It certainly will in mine.