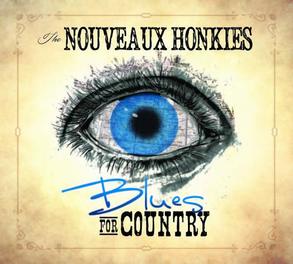 Tim O' Donnell and Rebecca Dawkins first worked together in 2007 in a touring band format before eventually marrying and deciding to sell up and buy an RV, which they kitted out with everything they needed, as a result of which they  have now been crisscrossing the U.S playing wherever there is a requirement to play a gig. On the strength of this and their debut album (the only ones I've heard) I suspect getting gigs is not a problem; it's more likely that too many are on offer for the talented Nouveaux Honkies to play. The album is inspired by and rooted in their travelling lifestyle with most of the songs being self penned although there is a tremendous version of Townes Van Zandt's Pancho and Lefty. They spend up to a couple of months at a time in various towns throughout the U.S before moving on to fresh pastures. This album was actually recorded in the small Texas town of Dripping Springs, with the relaxed atmosphere of the recording reflecting their casually itinerant life style.
Tim, who handles most of the lead vocals, has a nice warm, expressive vocal style and is a gifted guitarist, whilst Rebecca is a hugely talented violinist and a perfect match vocally with her appealing femininity. She occasionally takes lead and I suspect that as her confidence builds she will handle more, she certainly has the vocal chops although vocally the pairing equates to an overload of talent!
This is their fourth release with the first being 2008s excellent 'Where do I go,' followed by 'I'm dreaming of a Honkie Christmas' in 2010 and a five track recording entitled 'Live at Sun.' Stylistically they are difficult to label. As the album title suggests there is blues in their music as well as country but my feeling is that the recording leans much further towards country albeit with a little folksiness in the mix. It is likely that when writing songs Tim doesn't aim for a particular genre, instead choosing to let the music flow naturally from his imagination with several songs even having vague elements of pop and rock, but possibly due to Rebecca's up front fiddle, country music seems to be what links everything together.
The title song Blues For Country signals an easy going start to the album with an excellent vocal, fiddle, bass, percussion and guitar. The fiddle is the lead instrument on a just below mid tempo song that is interspersed with a nice deep twangy guitar and an excellent guitar solo that joins with the sawing fiddle. Their version of Pancho & Lefty is a terrific version of the classic Townes Van Zandt song with Tim on lead vocal and Rebecca harmonies with her fiddle meandering around the melody and Tim's acoustic guitar grounding the song. There is a lovely melodic guitar sound, with the ubiquitous fiddle, on She's Nothing But Wrong, an easy rolling composition with nice percussion and deep powerful bass, supplemented by a tuneful mandolin and dobro on yet another excellent song. Velvet is         a song that thanks to bass, shuffling percussion and Rebecca's fiddle almost has a jazzy feel, added to by Tim's guitar, with Tim also on lead vocals and Rebecca adding her lovely feminine harmonies. That is followed by Whiskey's Getting Harder To Drink, a lovely country ballad with the steel guitar adding to the atmosphere with the fiddle on a song that often has the feel of an old 'country and western' song mixed with a little of Guy Clarks style.
We often talk about albums that repay repeated listening sessions by revealing even more depth and nuance with each play. This is certainly one such recording thanks to the lyrical qualities, the hugely appealing melodies, the two strong vocalists and their playing, but also the quirky, relaxed arrangements that bring a tremendous individuality and diversity to a real beauty of an album. This is a recording that in all probability contains something for everyone!