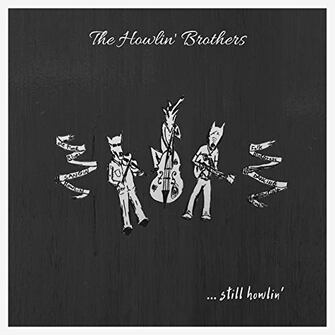 How are the Howlin' Brothers not superstars?! Normally it's about here that I start criticizing the Nashville money men for not taking a punt on a hugely talented trio of highly original musicians who I'm sure if heard by 'Joe public' would soon become superstars and prove you don't have to make music by numbers to get noticed. But, I'm not going to start spouting off today! The above is only a sentence, not the usual paragraph or two of bile that some have reassuringly accused me of!  I say 'reassuringly' because at least my mini crusade against mainstream 'music by numbers' has made an (admittedly miniscule!) impression.
This is their fifth studio album and I'm happy to say that every one of those recordings is indispensable for any fan of 'real country music.' It may not have much in common with the 'country pop' that inhabits the charts but there is no doubt about its generic roots that go so far back  into the days before this 'folk music' even had a name, other than, perhaps, 'hillbilly music' and in some cases 'race music,' (the original generic title for 'the blues').
The trio now consists of Dan Swan on upright bass and vocals, Ian Craft plays fiddle and banjo (including slide banjo) and vocals, with Jared Green on guitar, harmonica and vocals. I've seen them variously described as a 21st century version of an old mountain string band and as a band that blends country, folk and blues, a combination of rootsiness that gets reasonably close to summing them up! One description even had them ' Sounding like what would happen if a bunch of Appalachian punk rockers formed a jug-band,' again, as accurate a description as you are likely to get! They write and perform music that is most definitely not sanitized; in fact it is not even smoothed out! Instead it is of the highest quality, excellent songs that 'follow the tradition' but not slavishly so, instead having a great deal of modernity that includes everything from humour to deep heartfelt pathos and with just about every emotion and experience in between. The Howlin' Brothers are no ordinary string band and have a completely natural style that lifts them far above the ordinary, in fact on many of their songs if you could only add a few scratches and pops the listener could easily be lulled into thinking the music came from nearly a hundred years ago.
I reviewed the 'Brothers,' (they are not siblings but are most definitely 'brothers in music') 2014 album 'Trouble,' way back, and unsurprisingly, in 2014, eventually making it one of my 'Albums of the year,' something this recording could duplicate in 2019, such is the quality. That said, on to the contents of this tremendous new disc.
Album opener, Lucky enough, gats things off to a flier with its strange otherworldly intro in the shape of banjo and harmonica, very quickly joined by bass and bluesy lead vocals on a composition that is part blues part 'hillbilly' song. The sawing fiddle gets things underway on Uncle Penn, a song that is part bluegrass, part old time 'hillbilly' and a performance that is easily imagined at a rural hoedown in an old lost holler on a Saturday night before looking for redemption at the church on Sunday. Harmonica song starts, not unnaturally, with harmonica supported by accordion, joined by bass and percussion and an evocative Cajun/hillbilly vocal. The fiddle weaves in and out of an excellent song as it meanders its easy going way to the conclusion and such is the 'old time' quality that it almost feels like a 1920s or 30s recording that has been cleaned up. On Way up the hill fiddle and banjo, along with the metronomic bass, drive this excellent song along in the manner of the old time string bands without ever losing sight of the fact they are living in the 21st century. The playing, as on every track, is superb, the vocals evocative and the whole atmosphere they create is completely natural and 'authentic.' It is those two elements that put them into the upper echelons of modern day string bands. The impression is always there that they are not trying to emulate anyone from any era; instead they play the music that feels natural to them in their own unique and highly original way.
I select songs for my radio shows from every album I play at home which, on exceptional albums, can be around a half or even three quarters of the tracks. Every song on this album will get played, although sadly, not on the same show. (Licensing etc!)