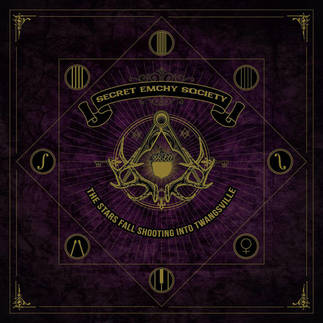 From very first listen I loved this album, after which I loved it more and more with every listening session! I've followed Cindy Emch's musical career since her early days as a co-founder of Rhubarb Whiskey. Since their two tremendous albums and one e.p. there have been recordings with 'Oakland Wine Drinkers Union,' 'Sinners Tonic,' 'Vagabondage,' 'Feral' and now this gifted collection of friends, of which more a little later.
It's difficult, maybe impossible, for me to visualize an album that has more warmth, cohesion and an almost strange edginess than this new offering from Cindy and friends. There is darkness, a little light, optimism, pessimism, sadness and joy all propelled by a huge musicality that conjures up, at least on occasions, late nights in New Orleans and a few other indiscernible places that are wrapped in a smoky, misty deep atmosphere. It is country music with jazz and blues influences with a deep gypsy feeling throughout, in fact, stylistically, extraordinarily unique! It is certainly an album that fits relatively comfortably into the 'country music' racks but with a degree of originality and the wearing of influences on sleeves that has to be heard to be believed.
Much of this is down to the sometimes unusual juxtaposition of instruments that helps give this album an often surreal otherworldliness that takes the songs out of time, and of course, Cindy's musical vision and the talents of her co-band members! Those instruments, in particular the brass and accordion are what gives the album its signature sound, emphasized by some great guitar playing, piano, thudding bass and propulsive percussion. Add Cindy's deeply expressive vocal style that creates whatever evocation she desires and what more can the discerning listener wish for? There is more though; in the form of Carolyn Mark, the hugely talented Canadian singer songwriter whose albums are essential listening for all 'alt. country' fans. She sang harmonies on this recording as well as a truly gorgeous duet with Cindy, as did album producer, the gravelly voiced Tolan McNeill a man who has worked with just about everyone north of the border and many to the south, including Neko Case, who along with Carolyn Mark formed 'The Corn Sisters.' It's essential to try to abbreviate the cast of characters who helped out, starting with Cindy on lead vocals, guitar and accordion, Joel Fernandes on drums and lead guitars, Dennis Siemens played bass, the gifted Grayson Walker on accordion, Oliver Clements, trumpet and flugelhorn and contributions from J. Mclaughlin who along with Grayson Walker is one album into a recording career as 'Hearse.'
And so to the songs. All twelve were written by Cindy, some recently and others written over the preceding years in 'bits and pieces' but all incredibly strong and varied tales taken from her life experiences and observations. The chiming, melodic guitar is soon joined by trumpet, percussion and throbbing bass on Down to the river, in support of Cindy's evocative vocal on what could almost be termed a 'country song,' but one that has a little strangeness to it in the form of its equally New Orleans rooted atmosphere. Those familiar with Cindy's previous musical excursions know that the slightly off kilter feel is common to most of her work as evidenced by this excellent, edgy song! Bass, percussion, piano, accordion and some tremendous guitar playing support Cindy's vocal on Sorrow drowners, an excellent mid tempo song that has some gorgeous harmony vocals with an atmosphere that has a little country, a little New Orleans jazziness and much else besides. Songs are all we're left with has a haunting production, with ghostly piano plus bass, percussion and guitars with Cindy's evocative vocal and Tolans male counters on a gorgeous, edgy 'country' duet that has echoes of Dolly/Porter but in this case with no gloss or huge production values! It is just plain and simply a great song performed by two people at the top of their game and with an enviable depth of feeling for their work. Beautiful is another gorgeous duet, this one between Cindy and Carolyn Mark, with the accordion, bass and percussion for support on a song that sounds as if it could have been written for Rachel Brooke. There is a lovely melodic guitar sound with occasional piano on a song that has a depth that most singer songwriters can only dream about. Finally, there is some more excellent bass, percussion and accordion on End of pretty, a chugging mid tempo song that has an almost vaudevillian fairground atmosphere with the piano adding to the mix that is eventually joined by the trumpet.
The overall atmosphere that is created on this extraordinary recording is predominately rooted in 'country' but I can't lose the feeling that much of the uniqueness of the album is due to the fact that there is often a deep, smoky New Orleans or Vaudeville flavour. It is more than just the accordion and brass that is responsible for this but I'm not sure how. All I know is that I love it and I'm sure that when you get your copy, you will too!

​
The album is due to be released on 1st May